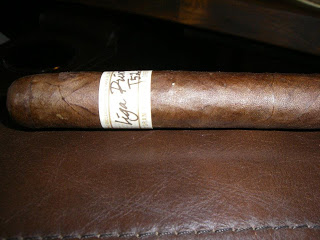 For each year’s induction of cigars, the Cigar of the Year selected by me will qualify for automatic induction.  Given that I established the Hall of Fame in 2011, I decided to include my selection for 2009 Cigar of the Year.

The distinguishing factor is the American Stalk-Cut Habano wrapper.  The American Habano wrapper is a Connecticut Broadleaf wrapper of Stalk Cut Tobacco.  For Stalk Cut Tobacco, this means when the leaf is cut, the entire leaf is cut – including the stalk.   When the leaf is hung to dry, it is hung to dry from the stalk . For the T52, this provides a beautiful dark/reddish wrapper.

From a flavor standpoint, there is a ton of complexity.   Highlights from the flavor profile include: coffee, cream, orange, chocolate, and pepper spices.   This cigar is a textbook example for balancing flavor vs. strength of a cigar.  It’s full-bodied in flavor and medium to full in strength (although it becomes full at the very end)

Construction is top-notch. For a Hall of Fame cigar, one would expect consistently outstanding burn and draw.   This is exactly what the Liga Privada T52 brings to the table