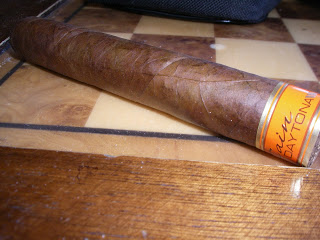 We are have now reached the halfway point of the 2011 Cigar of the Year countdown.  For this epic encounter we come to an early 2011 release that was one of the most anticipated cigars that cigar enthusiasts were waiting to get their hands on.  This cigar comes from the folks of Oliva Cigars.

Coming it at #16 is the Cain Daytona.  The Cain Daytona is the latest release in Oliva Cigars’ Cain line. The Cain line has become synonymous with some very strong cigars.  For the Cain Daytona, the objective was to produce an amp’d down version of the Cain cigar.  This was done by using a milder version of the Habano wrapper that was used on the Cain Habano as well as utilizing ligero from Jalapa valley.  The result is what I consider the smoothest of all of the Cain cigars.  At the same time, there still is enough punch in this cigar while not sacrificing the flavor.

The Cain Daytona also has a lot of complexity when it comes to flavor.  It features flavors of chocolate and orange citrus.  It also provides a nice black pepper flavor to make up the spice profile.  I also detected notes of nut, butterscotch, honey, cream, cedar, and char along the way.   The cigar improved with time in terms of the burn, and the draw was excellent.  In the end, there was still enough strength to qualify this as a medium to full strength cigar.   The flavors are classic full-bodied.   Finally for large ring gauge enthusiast, this cigar delivers well in the 6 x 60 version.