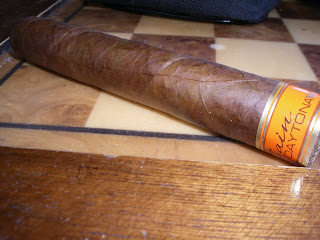 As we enter the Spring release cycle for the new cigars for 2011, there is no doubt one of the most hyped new blends is the Cain Daytona.  I believe there are three reasons:  1) It probably represented one of the biggest and earliest releases of the Spring release cycle; 2) It has received a lot of attention on Studio Tobac – which has already built a loyal following;  3) It carries the Cain name – which in nearly two years has become a staple with many cigar enthusiasts.   Given this hype, my expectations were high. I am happy to report that this cigar surpassed my expectations – and knocked it right out of the park!

The Cain Daytona is the fourth blend in the Cain brand under the Oliva Family of Cigars.  The three previous blends (Habano, Maduro, and F) had garnered a reputation for being some pretty stout cigars.  The Cain Daytona can be summarized as an amp’d down version of a Cain.  The following came from the Studio Tobac web-site:  The CAIN DAYTONA is a medium bodied offering blended using only Jalapa Ligeros. Jalapa Valley is Nicaragua’s northern most tobacco area. It is well known for producing the country’s most medium and smooth fillers. CAIN DAYTONA takes its flavor profile from this distinct area. The DAYTONA offers a solid medium taste with an abundance of natural smoothness. The result, a creamy cigar with true Nicaraguan taste.

Last week, I provided a preview of this new blend.  It is worth noting that a milder Habano wrapper was used on the Daytona than on the original Cain Habano.   Now I do agree, the Daytona blend is definitely the smoothest of all the Cain cigars.   As far as this being medium-bodied, I have a different opinion on this.

Let’s take a closer look at the composition of this cigar:

Naturally, being the big ring gauge fan, I gravitate toward the monster sized 660.   This cigar looked like a meal.  For this cigar experience, it was a straight cup into the beautiful cap and then it was on for the initial toast.

I love a cigar that gives complexity right out of the gate and the Cain Daytona does that.   The initial flavor notes are a combination of black pepper, nut, and a sweetness that resembled butterscotch.  Since the pepper is not overwhelming, the smoothness that was advertised lives up to its reputation.  In the initial third of the cigar, the butterscotch sweetness subsides a bit and I actually detected more of a honey-like sweetness.   I also picked up notes of cream.

The second third is really where the flavors take it to the next level.   The notes begin to transition to a combination of chocolate and orange citrus flavors.  You might be thinking the orange band on the foot played tricks on my mind, but I will stand behind the orange citrus flavor.   This is a very natural sweetness – and not one of an infused nature.  Combining this sweetness with the chocolate really makes for something special.

As the smoke progresses to the last third, I began to detect a bit of pepper and char.    I do admit, toward the end of my 6 x 60, I did get some harshness,   It wasn’t too bad (it was at the very end where I noticed the harsh notes – and this cigar had already proved itself to be a very smooth cigar) and by then I had smoked this monster for two hours.  The finish was cool and firm – despite the size and duration of the smoke.  Overall, wonderful and high complexity.

The term that was bantered around quite a bit was “Medium”.   I can tell you – this is not a Medium in strength or body.  For starters, as far as body goes – the flavors are pronounced and deep.  I know some will argue, but this is a full-bodied smoke.   As for strength – yes, this cigar is not going to have the punch like the other Cain brand members.   However, I felt some of the nicotine – especially in the second half   I still put this in the Medium to Full range as far as strength go. Remember there also is ligero in this cigar, some I’m sure that helps give it a kick.

The burn and draw surprised me as well.  This was a newly shipped cigar that had not aged in my retailer’s humidor that long.   Yes, I had a few touch-ups, but nothing too alarming.  The burn was straight for the most part – and the cigar did not burn quickly.  The draw was excellent – again, I might have expected some tightness, but this was no the case here.

Overall, this was an amazing cigar experience. I categorize this as “smoothness with a kick” .  I have now had two of these and I have no problems saying this is the best Cain release to date.  I fully expect this cigar to be one of the best selling lines in 2011.