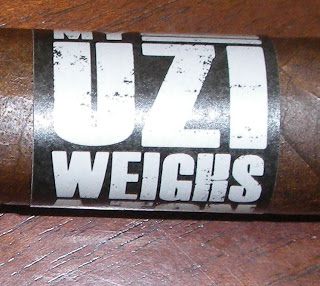 Prior to the 2011 IPCPR trade show, the joint-collaboration by Drew Estate Subculture Studios with Joya de Nicaragua called “My Uzi Weighs a Ton” (MUWAT) began to make its way in unbanded limited releases.  It was at IPCPR 2011 when the cigar made a more official debut – complete with banding.  The MUWAT was a cigar geared a large ring gauge cigar enthusiasts available in three lengths with a 60 ring gauge.   During this time, there was already mention of a line extension to include a 4 x 44 vitola called the “Infamous Bait Fish”.   A decision was then made to initially offer the Bait Fish as a retailer-exclusive to New Havana Cigars.  New Havana Cigars is now reporting the first shipment of the Bait Fish is expected the week of December 9th.  However, this is not just a new vitola, but a modified blend of the original MUWAT.

As retailers and consumers sampled the MUWAT, some of the initial feedback was they were looking for a more fuller cigar in terms of strength.   The MUWAT was positioned as a medium/medium to full strength cigar  A decision was made to modify the blend slightly for the Bait Fish  in order to bring the blend to full stength.   This stronger blend has been known as the “EF” blend.   Essentially, the Bait Fish is different cigar than the original MUWAT.

Here are some more particulars:

The MUWAT Bait Fish is currently available in a single vitola – a 4 x 44 Petit Corona.

Stay tuned for more news on this cigar