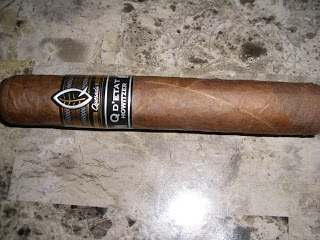 The Q d’etat is a cigar intended support the cigar industry’s battle against the government and Pleasure Police factions.   This line is intended to be a limited release – with 1000 boxes of 10 cigars for  each vitola being made.  To help aid in the battle  against the Pleasure Police, Government, and FDA –
each box will contain a form to fill out to join Cigar Rights of
America.

The Howitzer is a 6 x 60 vitola.  The name “Howitzer” is taken from the name of an artillery piece that is a part of the cannon family.  It is capable at firing at relatively high trajectories.

The first vitola, the Molotov was made in the shape of a Molotov cocktail.

The Quesada Q D’etat Howitzer will be an all-Dominican puro like the Molotov.

No details on the third vitola have been disclosed at this time.  Here are the two vitolas that have been announced.