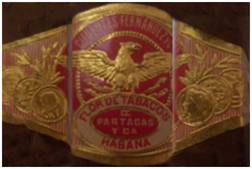 Richmond, VA—General Cigar is proud
to introduce Partagas
1845,
a new, four-cigar collection which embodies 167 years of heritage and expert
cigar making. This exciting new take on the venerable brand is a departure from
the traditional Cameroon-wrapped expressions of Partagas®, and is set to make
its retail debut on April 9, 2012.
Alan Willner, vice
president of marketing for General Cigar explains, “Partagas 1845 is uniquely
positioned. This new collection celebrates Partagas’ rich heritage while
ushering in a new taste spectrum for the brand. As such, it will appeal to the
premium cigar smoker who favors the quality and consistency of classic brands,
while also sparking the interest of discriminating smokers who constantly seek
exciting new tastes.” 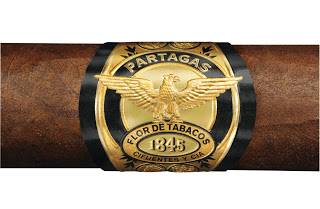 Partagas 1845 is full-flavored with a
medium-bodied taste profile and bears hints of coffee and cocoa. This unique smoking
experience sits firmly between the mild and aromatic flavor of Partagas (yellow
box) and the strong and sweet taste of Partagas Black Label.
Jhonys Diaz (vice president of operations) led blend
development, collaborating with rising stars from General Cigar Dominicana
including Francisco Rodriguez (general manager of operations) and Yuri Guillen
(production manager).  In creating
Partagas 1845, Jhonys and his team started out with more than 50 different
blends from the company’s vast tobacco library. Together with guidance from Benji
Menendez, and with input from supervisors from General Cigar’s Dominican and
Honduran factories, the blends were continuously test smoked and tweaked until
the final blend was chosen by General Cigar’s innovation team.
The legendary Benji Menendez served
as an advisor on blend development. In this, his 60th year in the
premium cigar business, Benji exalts Partagas 1845 as “one of the most
significant blends I have ever been involved in developing.”
“Partagas
is a brand that is part of my soul and part of my heritage in the business. It
is very sentimental for me, so coming out with the next Partagas collection to
follow up on the Master Series was a project that I cared very much about. This
is a dream come true for me, to help the next generation of cigar masters
create new cigars and grow in the business. If I can plant a seed in their
minds so they can grow a tree, I am happy,” he reflects.
To
achieve the characteristic, full flavor of Partagas 1845, Dominican Piloto
Cubano is blended with Nicaraguan tobacco from three separate growing areas. Some
of the filler tobaccos are aged in Dominican rum barrels, a process which enhances
their flavor, and is exclusive to General Cigar.
The
Connecticut Habano binder is unique unto itself, for it was developed as a
result of General Cigar’s dedicated research and development initiative and as
such, is proprietary. Bearing the distinction of having taken nine years to
develop, the binder offsets the blend with a touch of sweetness.
The
blend culminates in a lustrous Ecuadoran Habano Viso wrapper which dresses
Partagas 1845 in a unique color and hearty texture.
The
collection will debut with these four frontmarks, each protected in boxes
containing 20 cigars: Corona Extra
(4.5” x 46), SRP per cigar $5.99; Robusto
(5.5” x 49), SRP per cigar $6.49; Gigante
(6” x 60), SRP per cigar $6.99; and Double
Corona (7.25” x 54), SPR per cigar $7.49.
The trade dress pays homage to the brand’s rich history,
by interpreting elements of a turn-of-the-century Partagas band (circa 1900). The
band imagery is rotated for optimal presentation, whether on the shelf, in an
ashtray, in hand, or when smoked, and is further highlighted by advanced
printing techniques that command attention.
–
Partagas 1845 is housed in one of the most innovative
cigar boxes ever seen in the premium cigar category. Additional details about
this industry-first packaging will be released prior to the launch of Partagas
1845 on April 9.