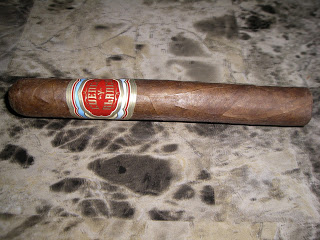 Cigar Aficionado has released information about a forthcoming release by Joya de Nicaragua.  The new cigar will be called Cuenca y Blanco and it will make its debut at the 2012 IPCPR trade show in Orlando Florida.

Last summer, there was no doubt the number one free agent in the cigar market was Jose Blanco.  It was considered a huge coup when Dr. Alejandro Martinez Cuenca of Joya de Nicaragua signed him to be a Senior Vice President.  The big question was going to be what direction he would take the company. We now have some answers, and the new Cuenca y Blanco cigar marks a radical change for Joya de Nicaragua.

The Cuenca y Blanco is named after the two principals of Joya de Nicaragua.  The big difference is that it incorporates tobaccos from four countries: Nicaragua, Ecuador, Peru, and the Dominican Republic.

Blanco said on his Facebook page, “Have spent some exciting times creating this blend at JDN, Nicaragua! This is a cigar all about Flavor flavor flavor, complexity, balance, good aroma and a long finish. Here you have it!”

The following is the blend and profile information as reported by Cigar Aficionado:

As mentioned the blend utilizes tobaccos from four countries:

The Cuenca y Blanco will initially be available in five sizes: