Back on the February 4th, 2012 Cigar Dave show, a new cigar from Rocky Patel Premium Cigars was announced.  This new cigar, the Burn Special Reserve was intended to be a cigar to be made available as an exclusive to brick and mortar retailers that have a Rocky Patel sponsored lounge.   The name actually comes from a Rocky Patel sponsored lounge located in Naples, Florida.
The cigar was launched on March 1st, 2012 at Cigar Cave in Palm Harbor, Florida and has since started to make its way to Rocky Patel lounges nationwide.   Recently, I had an opportunity to sample this blend.  Overall, I’ve found this to be another solid addition to the Rocky Patel portfolio.

Let’s break down the architecture and smoking experience of the Burn Special Reserve and see what this cigar brings to the table.

The cigar features a beautiful Ecuadorian Sumatra wrapper.  Details of the rest of the blend are proprietary.

The Burn Special Reserve is currently available in three sizes:

For this cigar experience, I selected the Toro vitola. The wrapper to the Burn Special Reserve Toro is a rich chocolate-colored wrapper.  It has a deeper looking chocolate-colored wrapper than most Ecuadorian Sumatra wrappers I have seen.  The wrapper is very smooth and has an oily complexion.  There are some visible veins and to a lesser extent the you can see the wrapper seams as well.  From the foot, there is a farm/barnyard aroma that can be detected.

There are two bands on the Burn Special Reserve.  The main band has mainly a red, white, and gold color scheme – with some brown and black colors as well.  Prominently displayed on the front of the band is the text “BURN” in large white font with a black trim. That text sits on a red background.   There are gold stripes on the bottom and top of the band – each featuring embossed gold circles on it.   On the back of the band is the “RP” logo in brown and white.  That logo is surrounded by a circle of gold featuring small gold embossed circles. 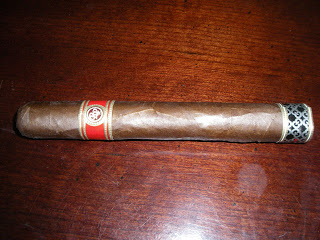 As I normally do, I went with a straight cut into the cap of the Burn Special Reserve.  Once I started the pre-light draw, I detected notes of chocolate and pepper.  I could also detect some of the farm-like notes on the tongue from the dry draw.  Overall, I was pleased with the pre-light draw from this cigar.  At this point, it was time to fire up the Burn Special Reserve and see what this cigar would bring to the table.

The start to the Burn Special Reserve has a quick spurt of pepper.  It was much shorter than some of the pepper blasts that are a trademark of Garcia family cigars.  The pepper recessed quickly and notes of leather (primary), grass (secondary) and chocolate (secondary) emerged.  The pepper became a tertiary note rather quickly.

In the first ten percent of the smoking experience, the flavors of  leather, grass, and chocolate converged in the forefront.  In these early stages, the chocolate notes took on more of a cocoa powder profile.  At this point, the leather, grass, and chocolate notes started to alternate as to which was the primary note.  The pepper spice slowly increased, but was more prominent on the retro-hale.

As the cigar experience moved into the second half, the flavor profile became more grassy and pepper like.  The leather and cocoa moved to the background but occasionally resurfaced from time to time in the forefront.  In the last third, the Burn Special Reserve took on a peppery profile.  The finish had spice, but was not harsh.  The finishing nub was firm and slightly warm.

I figured I would pay close attention to “burn” since this was the cigar’s namesake.  For the most part, this was a very good burn.   The burn line was sharp throughout the smoking experience – requiring minimal touch-ups.  The resulting ash was also white and not flaky.  The burn rate was ideal.   There were some points where the burn seemed to skew a little warmer, but I eased up on the draw and this corrected itself. The burn never got warm enough to cause any harshness.  The end was a little warmer than I like, but again no harshness resulted.

The draw was excellent.  When the burn skewed a little warm, this was more due to the fact that I probably was overdrawing.  Overall, the draw provided an enjoyable puffing experience.

I was a little surprised at how the strength started on the Burn Special Reserve.  The first half did not have much pop from a nicotine standpoint.  I assessed the strength as mild to medium to start.   By the time the cigar reached the second half, the strength had progressed to medium strength.

The body notes had what I term “just enough depth” to start.  These weren’t overly deep flavors, but were still effective.  I assessed this as medium-bodied.  Toward the very end, when the spice kicked in – the cigar moved into medium to full-bodied territory.

The balance between strength and body worked very well here from start to finish.  In particular, the medium-bodied notes worked very well with the lighter strength early on -and this balance didn’t lose anything when the strength increased.

Overall, it was a good smoking experience.  The grassy notes were a little more than I prefer from a flavor profile, but the cocoa and pepper notes helped offset this.  This is a cigar that can appeal to a wide range of cigar enthusiasts – and this is good considering this is meant to be a lounge exclusive cigar.  In particular, I feel novice cigar enthusiasts will enjoy this cigar in that it is flavorful, yet not too strong.  Experienced cigar enthusiasts might want this more for a first cigar of the day.  As for myself, I’m curious to try the monster-sized 8 x 60 next and see what that cigar brings to the table, but this the Toro is something I would smoke again.

Source: The cigars for this assessment were purchased from Tobacco World in Marietta, Georgia.