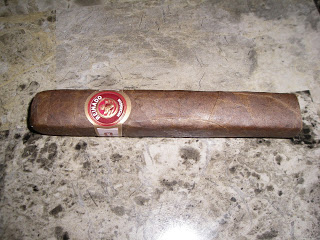 The Reinado Grand Empire Reserve marks the second release by indie cigar maker Reinado Cigars.   “Reinado” is Spanish for “Reign”. The company was founded by
Antonio Lam.  Lam has done a great job at building his brand and has
referred to his loyal retailers as the “Reinado Empire”. A little over a year ago, Reinado launched their core blend.  The core line Reinado Cigar was
well received in the marketplace and has helped the company begin to
establish their footprint. Last year we assessed that core Reinado Cigar and found it to be a very good smoking experience.  With the Grand Empire Reserve, Reinado Cigars raises the bar and takes things to the next level.

The distinguishing factor of Reinado Cigars is their unique fermentation
process to their Nicaraguan puros.  This process is also applied to the core Reinado Cigar blend.  With the case of the Reinado Empire Grand Reserve, this particular blend utilizes their unique fermentation process, but is fermented for a longer a period of time.  There is also an additional Nicaraguan filler that is included int the blend.

The plan is for the Reinado Grand Empire Reserve to be unveiled at the 2012 IPCPR Trade Show in Orlando, Florida. Since this is a pre-release cigar, we will do a pre-review on this cigar.  The purpose of
the pre-review is to share some experiences with the cigar.   A score
and assessment rating will be given once the cigar is officially released.  I will also preface that my experience with the Grand Empire Reserve is based on a single smoke.

Like its predecessor, the core Reinado Cigar, the Reinado Grand Empire Reserve is a Nicaraguan puro.  As mentioned above, one difference with the blend is an additional filler in the blend.

At this time the Reinado Grand Empire Reserve is a available in a single vitola, a 5 x 55 box-press size.

For my smoke of the Reinado Grand Empire Reserve, I went with my traditional straight cut.  After completing the cut, I proceeded to start the pre-light draw.  The dry draw note yielded me flavors of cedar and coffee.  Overall, I considered this to be a very satisfactory pre-light draw.  At this point, it was now time to fire up my Grand Empire Reserve and see what the smoking experience would bring to the table.

By the second half of the cigar experience, the cherry sweetness moved into the background while the coffee notes transitioned into the forefront.   The coffee, along with the signature Reinado floral notes would be the primary flavors in the second half.   The baker’s spice kicked up toward the end, but the Grand Empire Reserve did not get overly spicy.  The resulting nub was very good – firm to the touch and cool in temperature.

The Reinado Grand Empire Reserve scored very well here.  As I mentioned earlier, I was a little concerned that the box-press was a little soft, and I was worried this might impact the burn.  I did play it safe and I made sure I did not over-draw this cigar.   The draw itself was flawless and combined with a slower pace to smoke this cigar, it made for an very good smoking experience.  The resulting burn was very good as well.  The Grand Empire Reserve required minimal touch-ups to keep it burning straight.   The burn rate and burn temperature are things I worry about when a box-press is soft.  In this case, both the burn rate and burn temperature were ideal with no resulting issues.

The cigar itself produced a lot of smoke – something I like in a cigar.  While the resulting ash was white, it was somewhat on the flaky side.

The Grand Empire Reserve gave me a very positive experience.   The cigar had deep flavors, and the flavor notes I detected were very good.   The cigar itself performed very well from a construction standpoint as well.   The changes that Lam made in terms of fermentation and the blend seemed to have struck gold with this release.   This cigar should make a very good addition to the Reinado Empire.   This is the type of cigar I’d recommend to either a novice or experienced cigar enthusiast.  While it might be higher on strength and body for someone new to cigars, I think a novice would enjoy this smoke.   Experienced cigar enthusiasts will also appreciate the rich and mature flavors of this cigar.   This is certainly a cigar I will look forward to when it is officially released later this year.

Source: This cigar was provided by Antonio Lam of Reinado Cigars.  These
samples were initiated by Reinado Cigars in order to provide feedback.
Cigar Coop is appreciative for the sample, but in no way does this
influence this review.