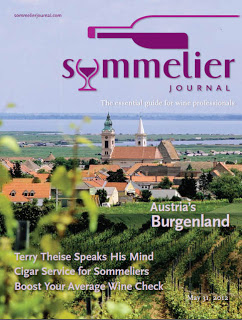 Miami, Florida – June 6th, 2012 – In
a recent article in the Sommelier Journal, America’s top wine expert,
Alexander LaPratt tabbed the La Aurora Preferidos #2 as his favorite
cigar.
The article which appears in the May 31st, 2012 issues and spans pages 87-90 breaks down the art of Cigar Service, which many sommelier’s offer upon request.

According to Mr. LaPratt, “[The La Aurora Preferidos #2]
is a fascinating cigar that I was introduced to while training for the
Best Sommelier in America competition. The shape is a perfecto, which
means it’s tapered on both ends. When you light it, you first taste the
wrapper (from Cameroon) and the binder tobaccos; toward the thicker
center, more of the filler tobaccos start burning, and the flavor
changes. It reminds me of how wine changes within a glass. The blend is a
touch spicy in the beginning, but  smoothes out as the cigar burns,
revealing complex flavors of coffee, toasted hazelnut, and cinnamon and a
creamy sweetness like that of milk chocolate.
Alexander LaPratt can be found at Atera in New York City, and the article written by Kara Newman can be purchased by subscription on the website, http://www.sommelierjournal.com/ 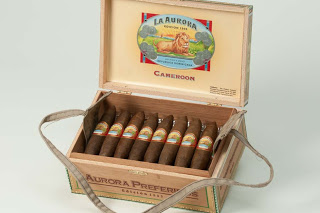 About Miami Cigar & CompanyMiami
Cigar & Company, founded in 1989, is the exclusive US distributor
of La Aurora brands which include Guillermo Leon & Leon Jimenes.
They are also the worldwide distributor of Tatiana, Don Lino, La Sirena
and Nestor Miranda line of cigars. They can found on the web at http://www.miamicigarcompany.com/ and http://www.facebook.com/miamicigarcompany.