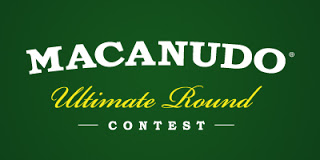 Richmond, VA— Macanudo®, America’s best-selling premium cigar brand, is
going to award eight lucky consumers and their guests with an all-expense paid
trip to Augusta to watch the 2013 Masters Golf Tournament live and in
person, as part of the Macanudo Ultimate Round Contest.
Between now and October 31,
consumers 21 years of age or older can submit their favorite golf-themed photo for
a chance to win a six-day, five night trip to Augusta, to see the game’s
greatest players compete in the 2013 Masters, the holy grail of golf
tournaments.
Consumers 21 years of age or
older can enter the contest by visiting http://www.macanudo.com or by logging on to the Macanudo Ultimate Round
Contest application on Facebook at http://www.facebook.com/macanudo.
They can also take a shot at winning through participating online cigar
retailers through August 31. No purchase necessary. For official rules and
complete details, visit http://www.macanudo.com.
“Golf is a great social
occasion where friends get together to smoke cigars,” said Bill Chilian,
director of marketing for Macanudo. “For devoted Macanudo fans who enjoy the
game as much as they enjoy their cigars, the Macanudo Ultimate Golf Round
contest is a once-in-a-lifetime opportunity to experience the ultimate combination
of both pleasures.”
A total of eight winners will
be selected, one from entries posted in the Macanudo Ultimate Round photo contest,
and seven from entries submitted through online cigar retailers. Each winner
and one guest will be whisked away to the mecca of golf from April 10-15, 2013 where
they will enjoy a golf-lover’s dream come true: all-access tickets to the 2013
Masters, roundtrip airfare, lush accommodations and plenty of time to enjoy
their Macanudos.
Consumers of legal smoking
age are also invited to compete for Macanudo-branded items by Callaway Golf® at
Macanudo Putting Challenge events being held at participating cigar shops through
September. For a list of events, visit www.macanudo.com/leaderboard.
Additional details about the
Macanudo Ultimate Round Contest will be posted on www.macanudo.com. Contest updates will be posted to the brand’s
dedicated Facebook
and Twitter accounts.
About Macanudo Cigars
Since their introduction in
1968, Macanudo cigars have been a favorite among premium cigar connoisseurs.
The brand continues to be the best selling premium cigar brand in the U.S. and
also sells in more than 90 countries worldwide.  In addition to the base brand of Macanudo cigars, the brand
also features these collections: Macanudo Maduro, Macanudo Robust, Macanudo
Gold Label, Macanudo Vintage and Macanudo 1968.
General Cigar Co. Inc., a division of Scandinavian Tobacco Group, manufactures and markets handcrafted cigars for the premium market. Committed to delivering cigars of the finest quality, General Cigar’s skilled artisans produce Macanudo®, Cohiba®,  La Gloria Cubana, Punch®, CAO, Partagas®, Hoyo de Monterrey®, Excalibur® and several other leading premium brands in the company’s Dominican, Honduran and Nicaraguan factories. In addition, the company cultivates proprietary tobacco which is used exclusively in its blends. General Cigar also operates Club Macanudo®, a cigar bar in New York City. Based in Richmond, VA, General Cigar sells through tobacconists nationwide and also exports select products to 62 countries. For more information, please visit www.cigarworld.com

Note: In accordance with our Code of Ethics, Cigar Coop will voluntarily not be participating in this contest, but certainly encourages our readers to do so.