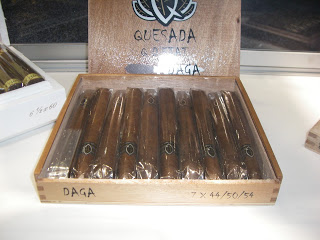 Quesada Cigars officially launched the third installment of its  Q D’Etat series.   This one is called the “Daga” and gets its name from being a “dagger” like weapon.  The Q D’Etat series has used weapon names in each of the releases.

The Daga is the longest of the Q D’Etat cigars.  This one is in a salomon shape.

A few days ago, we reported that the blend for this installment of the Q D’Etat would differ from the Molotov and Howitzer in that it would use a different blend – this one from the Quesada 35th Anniversary.

The blend of the Quesada 35th Anniversary is as follows.  This is an
indicator what the Daga will have.  This differs from the first
two Q D’Etat releases as they were Dominican puros.

The dimensions for the Q D’Etat Daga are described as 7 x 44/50/54.   The cigars are packaged ten to a box are arranged in an alternating fashion.