Luxury cigar smokers will soon have the chance to own one of the premium cigar category’s most treasured blends, thanks to the debut of two new frontmarks from the coveted Cohiba Edicion Diamante collection.

Ed Lahmann, senior brand manager for Cohiba remarked, “Cohiba Edicion Diamante made a big splash at the 2011 IPCPR show. Discriminating smokers spent thousands of dollars for the privilege of possessing the rare Cohibas. Due to overwhelming demand, we are releasing an extremely limited allotment of two phenomenal new frontmarks.”

Enrobed in a precious Cameroon wrapper tobacco from the 1980 crop, Cohiba Edicion Diamante boasts one of the most extraordinary leaves ever cultivated. In the past three decades since this outstanding tobacco was harvested, these rarified leaves have been nurtured and masterfully handcrafted.

To honor the well-balanced, refined taste of the 32-year-old wrapper, General Cigar’s team of cigar masters worked tirelessly to create the optimal blend for Cohiba Edicion Diamante.  A proprietary Dominican Piloto Cubano blend bolsters the subtly complex taste of the elegant wrapper which enrobes an Indonesian Jember binder. To taste this cigar is to experience the art of cigar making at its finest: a fragrant aroma opens to a delightfully balanced smoke with nuances of cinnamon and toasted wood.

Created to celebrate the exceptionally rare wrapper, Cohiba Edicion Diamante Robusto measures 5” x 50. The cigars are individually protected in wooden coffins and displayed in handcrafted mahogany boxes. Individual Robusto cigars can be acquired for a suggested retail price of $22.00, and will be sold at $220.00 for a ten-count box. Sister frontmark Cohiba Edicion Diamante Toro is a 6” x 54 smoke which is encased in crystal. Each cigar will be available for a suggested retail price of $25.00. Cohiba connoisseurs can purchase a handsome mahogany box containing ten Toros for $250.00. 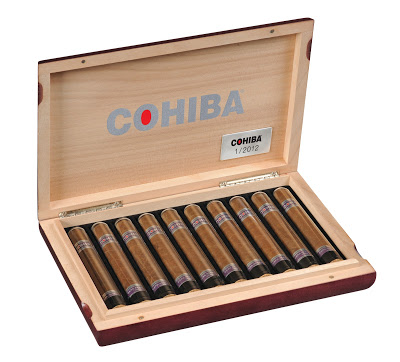 About Cohiba Cigars
True cigar connoisseurs recognize Dominican Cohiba cigars as one of the finest brands available in the U.S. market. Critically acclaimed for their meticulous construction and refined taste, the core brand of Cohiba cigars is complemented by these premium collections: Cohiba Black, Cohiba Puro Dominicana and Cohiba XV.