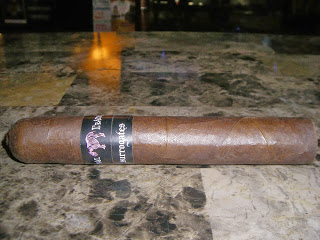 A picture on Facebook from Dan Welsh of L’Atelier Imports showed off the fifth cigar in its Surrogates line.  The name of the cigar listed was the Surrogates Animal Cracker.

There was little in the way of details around the Animal Cracker.  The most interesting feature of the cigar was the covered pigtail style cap that is reminiscent of the Tatuaje Face cigar.

Last week, L’Atelier Imports send out an email announcing its new L’Atelier Maduro cigar.  In that email, Welsh mentioned that there was a possibility of “a new Surrogate or two”.

The Animal Cracker will be released in one vitola – a 6 x 60 vitola.