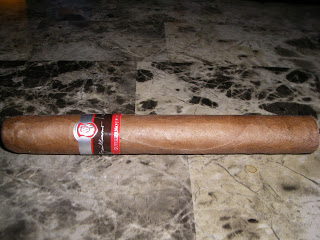 In 2010 La Aurora Cigars was in the middle of celebrating its 107th anniversary.  As a part of that celebration year, the Guillermo Leon Signature was released.   This cigar bears the name of La Aurora owner Guillermo Leon (who would actually outright buy the company from E. Leon Jimenes the following year in 2011).   The Guillermo Leon Signature  was showcased by La Aurora at the 2010 IPCPR.   It was that year where we had our first experience with this cigar.  The cigar proved to be a winner in our book as it came in as our 2010 #25 Cigar of the Year.  Since then, the cigar has remained a staple of the La Aurora Cigars portfolio.   The great news is this cigar continues to perform at the highest level as it delivers a consistent, outstanding smoking experience.

The Guillermo Leon Signature, like the rest of the La Aurora portfolio is made at the La Aurora S.A. factory in the Dominican Republic.  La Aurora Cigars are distributed in the United States by Miami Cigar and Company.

Without further adieu, let’s break down the Guillermo Leon Signature and see what this cigar brings to the table.

The Guillermo Leon Signature is a multi-national blend with tobaccos from six countries and three continents.  It is also the first La Aurora cigar to feature a double binder.

For this cigar experience, I went with the Corona Gorda vitola. The Ecuadorian Habano Vuelta Arriba of the Guillermo Leon Signature Corona Gorda can best be described as medium brown with some reddish clay color to it.  The wrapper is definitely on the silky and smooth side and not very oily.  There are some visible veins and the wrapper seams are visible upon close inspection.

The band to the Guillermo Leon Signature features a red, silver, and black color scheme.  The band can best be described in three segments.  The top segment features a silver and red La Aurora lion.  The remainder of the segment is silver with some pin striping.  A red stripe is at the bottom of that top segment. The middle segment has a black background with the text “Guillermo  Leon” in silver cursive font.  In the bottom segment, there is a red background with the text “GUILLERMO LEON” in silver.

For my cigar experience of the Guillermo Leon Signature Corona Gorda, I went with a straight cut to remove the cap.  I then moved on to the pre-light draw.   The dry draw notes were outstanding.  It provided a unique mix of cinnamon and black pepper notes.   With a more than satisfying pre-light draw, it was time to light up my Guillermo Leon Signature and see what this cigar would bring to the table.

The start to the Guillermo Leon Signature provided notes of wood, pepper, and baker’s spice.  All of the notes were pretty much on par with no dominant flavor.  As the cigar moved through the first third, the flavor profile evolved to primary notes of sweet cedar spice and pepper.  The pepper was prominent on the retro-hale and had more of an exotic spice quality.

In the later part of the first third, some notes of cinnamon joined the cedar sweet spice and the pepper.  The flavors continued to work in nice harmony together.  In the background there was an interesting creamy undertone.  While the Guillermo Leon Signature had a lot of spice to it, the creamy undertone gave this cigar a nice smoothness.

In the second third, the spice changed up again and became more of a mesquite spice.  The cinnamon, cedar sweet spice, and creamy undertones were now a background role.

In the last third, the spice changed one more time – this time back to a classic pepper.  The cedar sweet spice returned to the forefront joining the pepper.  This is the way the flavor profile would hold until the end.  While the end of the cigar was spicy, it was not harsh.  The resulting nub was ideal – firm to the touch and cool in temperature.

The Guillermo Leon Signature has some great construction to it – and this reflects beautifully in the burn and draw.  Both attributes score extremely well.  The burn line remained razor sharp from start to the finish – requiring minimal touch-ups.  The resulting ash was tight and white in color. The ash resulted in virtually no flaking.  The burn rate and burn temperature were ideal.

The draw to the cigar was excellent as well.  I’d categorize this as a low maintenance cigar to puff on – making for a very enjoyable smoking experience.

It is now almost 2 1/2 years since the Guillermo Leon Signature made its debut.  This cigar was extremely impressive when it was released.  It remains an impressive cigar.  It has some nice flavors and delivers some nice complexity. I’ve smoked several vitolas and to me – each time the Corona Gorda is the one that delivers the best overall experience.  It seems to be the “sweet spot” for this particular cigar blend.  This is a cigar I’d probably recommend to the more experienced cigar enthusiast because it does have some strength to it.  As for myself, this is a cigar I’d smoke again – and definitely consider a box purchase for.

Source: The cigars for this assessment were gifted to me by a friend.