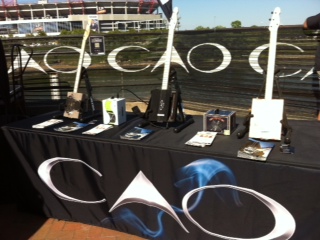 From the CAO Cigars web-site, this is how the Mochado is described (and a picture is included on the website):

The Mochado is a rough-cut cigar designed to showcase the flavor obtained from the cigar’s outer-most leaf and most elaborate and important component, the wrapper. To achieve this, CAO blender Rick Rodriguez, replicated a small version of La Traviata’s natural and Maduro cigars, but wrapped 3/4 of the way down to the foot. The remaining portion is comprised of only La Traviata’s coveted binder and filler. This palatable experience allows connoisseurs and novices alike to experience a flavor change due to the cigar’s wrapper. It’s been said that about 60-70 percent of the cigar’s flavor comes from the wrapper leaf.

No specific dimensions were disclosed, but it is described as a small version of La Traviata’s Natural and Maduro cigars.