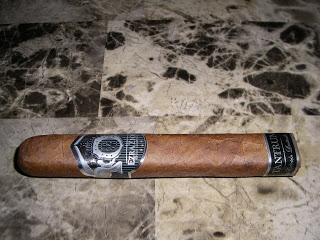 Ezra Zion Cigar Company announced this week their third blend, the Ezra Zion Tantrum.  The initial story of this release was broken by halfwheel.com.  The company announced today on its Facebook page that the cigar will be launched at a world premiere event being held at Michael’s Tobacco of Keller in Keller, Texas (just outside of Fort Worth) on April 26, 2013

2013 is shaping up to be a busy year for Ezra Zion.  Earlier this year, information came out the second cigar in their Honor Series would be the Ezra Zion Honor Series MLK (a tribute to Dr. Martin Luther King).  The company also announced that their Inception cigar was being re-branded to Jamais Vu..

Ezra Zion Cigars made their debut in 2012.  It was late in 2012 where it was announced that Gary Griffith’s Emilio Cigars would be handling their distribution.

Information on the blend and vitolas was initally published in the halfwheel story and has now been published to the Ezra Zion Cigars web-site.  Here is a recap: