The Padilla Connecticut is a new cigar launched by Padilla Cigars in 2013.  It was late in 2011 where company owner Ernesto Padilla made a decision to discontinue production of (what was) his current brands.  This decision was in part because his portfolio had gotten discounted too much by the online catalog companies.  To get back to his roots, Padilla launched several new lines in 2012 targeted for brick and mortar shops and with price potation.  In addition to the new lines, the company setup production agreements with El Titan de Bronze and Tabacalera Oliva, and entered into a distribution agreement with Oliva Cigar Company.   In 2013, Padilla continued to rebuild their profile and the launch of the Padilla Connecticut offerts a milder, Connecticut Shade offering to the new Padilla portfolio.  Recently I had an opportunity to smoke this new cigar. Overall this is a solid release by Padilla and shows the company is heading in the right direction.

Without further adieu, let’s break down the Padilla Connecticut and see what this cigar brings to the table:

There are two bands on the Padilla Connecticut.   The primary band has a black, white, and gold color scheme.  In the middle of the band is a black and white pencil sketch lion.  Above the lion it says “PADILLA” in small gold font.  Below the lion is a black shield with an “E/P” combination in the middle with gold font.   To the left and the right of the shield it says “Padilla” in gold scripted font on a black background.  The remainder of the band has black, white, and gold colored designs.

Below the primary bend is a secondary band.  The band has a black background.  The text “Padilla” is a black cursive font on the middle of the band.  Below the “Padilla” text is “CONNECTICUT” in white font.  There is black and white pin striping around the trim.  There are gold medallions to left and right.

Prior to lighting up the Padilla Connecticut, I opted for a straight cut to remove the cap.  After successfully clipping the cap, I proceeded with the pre-light draw.  The dry draw notes provided a mix of wood and pepper.  To a lesser extent there also was some cherry sweetness and floral notes.  Overall this was a positive pre-light draw experience.  At this point, I was ready to light up the Padilla Connecticut and see what the smoking experience would bring to the table.

The flavor pattern settled with the citrus as primary notes.  The pepper notes did increase a little, but still remained a step behind the citrus for most of the smoking experience.  Meanwhile the cream notes were secondary.  Toward the end of the cigar, there was a spicy kick, which did throw me for a loop.  The close to the Padilla Connecticut was flavorful.  While it had some spice, it was not harsh.  The resulting nub was soft to the touch, but cool in temperature.

The Padilla Connecticut is a well-constructed cigar and this is reflected in the burn and draw.   From a burn perspective, the burn line was a little jagged, but it remained straight – and did have any tendencies to canoe.  The resulting ash was white in color.  For the most part the ash was firm, but there were a couple of points where some minor flaking occurred.  The burn rate and burn temperature were ideal. 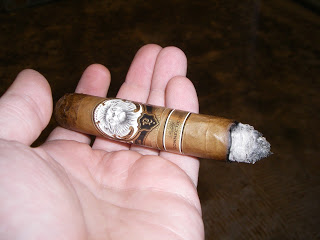 The draw to the Padilla Connecticut was outstanding.   This was a low maintenance cigar to puff on and it made the cigar experience enjoyable.

The Padilla Connecticut is mild in strength throughout the first third.   As it progresses into the second third, it moves into the mild to medium strength category.  Meanwhile the depth of the flavors start out mild to medium-bodied – and by the second third progress just enough into medium-bodied range.   The spicy kick at the end does increase the body a little, but it still remains medium-bodied. For the duration of the smoking experience, the body definitely has an edge over the strength.