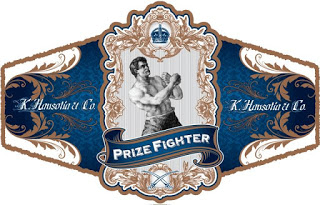 East India Trading Company, a subsidary of Gurkha Cigar Group has announced the launch of the “Prize Fighter”. This cigar will pay homage boxers from the era of the 1900s. It will be positioned as a value-priced cigar and will be launched at the 2013 IPCPR Trade Show in Las Vegas this July. Information on this new line was sent via press release to Cigar Coop.

The Prize Fighter is positioned as a “mild-medium bodied cigar with a smooth and elegant flavor profile that can be enjoyed at anytime of the day”. The cigars will carry a price point between $1.70 to $1.99. According to East India Trading Company, “Prize Fighter brings another meaning and a new dimension to the hand-made cigar category by offering a premium smoking experience at an affordable price-point.”

According to Juan Lopez, National Sales Director for Gurkha Cigar Group, “We are very excited and optimistic about the launch of Prize Fighter. We like to call this product ‘recession proof’, due to its affordability and great quality. This is a new venture for the company as we enter into the value-priced cigar category. We have very high expectations for this brand.”

The cigars will be made available in three sizes and packaged in 20 count bundles, 60 count/3 compartment trays, and specially designed fresh-lock pouches (5 cigars
per pouch/8 pouch outer).

Here are the particulars about the line:

The Prize Fighter will be manufactured in the Dominican Republic.

The Prize Fighter will be launched in three sizes:

Source: Information for this article was provided via a press release to Cigar Coop.