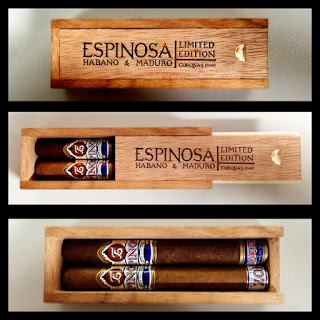 Espinosa Cigars will debut a special vitola in both their Espinosa Habano and Espinosa Maduro blends at the 2013 Chattanooga Tweet Up and Cigar Festival this August.  The vitolas will be a 5 x 42 corona and will mark the first time both of these blends were produced in this size.

The cigars will be packed in a slide top two count coffin box.  There will be one of each of the corona blends available in the box.  According to Espinosa Cigars at this time this will be an event only cigar.

The Espinosa Habano was launched in 2012 by Espinosa Cigars.  This was followed up in 2013 with the release of the Espinosa Maduro.  Both cigars are made by Erik Espinosa at his La Zona factory in Esteli, Nicaragua.

The Espinosa Habano features a habano wrapper and Nicaraguan tobaccos.  The corona becomes the fifth frontmark to be released in the series.

The Espinosa Maduro features a Mexican wrapper.  The other components of the blend have not been disclosed at this time.  Like the Espinosa Habano, this becomes the fifth frontmark to be released in the blend.