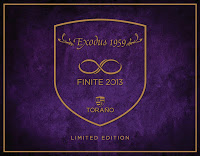 As we noted a few weeks ago, Torano Family Cigars is adding a new limited edition cigar to its Exodus line.  The new cigar will be called the Torano Exodus Finite.  In what is something that hasn’t been seen for quite some time by Torano, the Finite will be a Nicaraguan puro with tobaccos from four regions of Nicaragua.  The cigar will be showcased at the 2013 IPCPR Trade Show.  Details of this release were provided via press release to Cigar Coop.

In terms of the Finite, Torano Vice President of Sales and Marketing Bruce Lewis stated in the press release, “Finite is a word which perfectly defines the nature of this new release.  Based on the limited availability of the tobaccos we have incorporated in the blend, we knew we would only be able to make around 75,000 cigars. We have also created a unique symbol and date stamped every box, distinguishing features which will become synonymous with future limited releases under the Torano brand.”

The Finite becomes the first release in the Exodus line in four years.  The Exodus line was launched in 2001 by Torano  with the release of the Exodus 1959 (better known as the gold band).  This was followed up in 2002 with the Exodus Silver Edition.  Seven years would pass before the trilogy was completed with the Exodus 1959 – 50 Years (Copper Label).  As company president Charlie Torano stated in the press release,  “The original Exodus 1959 (Gold band) is one of the industry’s best-known brands and still one of our top sellers.  Its name commemorates the legendary Cuban cigar families’ 1959 flight to freedom.  The Toranos were one of those families.”

The Exodus joins the recently announced second “Blend from the Vault” D-042 and a re-packaged Torano Reserva Selecta as IPCPR launches.   The cigar is expected on retailer shelves this August.

Here are the particulars of the Torano Exodus Finite:

As mentioned the blend of the Exodus Finite is a Nicaraguan puro with tobaccos from four regions.

According to Lewis,  “Although the wrapper and binder are both grown in Nicaragua’s Jalapa region, the wrapper is shade-grown viso and comes from a higher priming, whereas the binder is sun-grown seco and is among the first leaves picked.  This blending gives the medium-bodied Finite its well-balanced character, one that hints of roasted nuts, complemented by a raisin-like sweetness.  The finish is long and features a cedar note.”

The Exodus Finite will be available in three sizes: