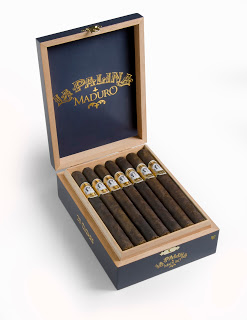 La Palina Cigars is adding a new vitola to its La Palina Maduro line.  The La Palina Maduro 40 will be a petite lancero in the line – bringing the total number of frontmarks to five. The
cigar will be unveiled at the 2013 IPCPR Trade Show.  Information on
the new frontmarks was release via a press release to Cigar Coop.

It was at the 2012 IPCPR Trade Show where La Palina launched the La Palina Maduro line.  This would become the company’s first maduro offering.  The cigar was released toward the end of the 2012 calendar year.

Here are the particulars of the La Palina Maduro:

The La Palina Maduro is also the first La Palina to leverage a San
Andres wrapper.  The cigar is made in Honduras.

For completeness, we list the five vitolas of the La Palina Maduro line.  All cigars are packaged 20 per box.

Source: Some information for this article was provided via press release received by Cigar Coop