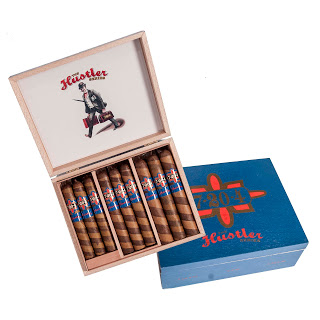 7-20-4 Cigars has announced that the company’s third release, the 7-20-4 Hustler will have a new size added in the form of a petite corona.  This will be in the company’s popular Dog Walker size – a 4 1/4 x 40 size used on its core line.  Information on this new size was communicated via a press release to Cigar Coop.

The 7-20-4 Hustler is barber-pole cigar that was showcased at the 2012 IPCPR Trade Show.   Like other cigars in the 7-20-4 line, the Hustler is an old cigar name resurrected by company founder Kurt Kendall.  The cigar was initially released on a limited basis at the end of last year.   The initial launch of the cigar was in three sizes – all packaged in a 27 count box containing nine cigars per size.

The 7-20-4 Hustler Dog Walker will have slightly different packaging.  The Dog Walker will be available in packs of five or ten.  The ten packs will allow the Hustler to used for single cigar purchases.

The company has also announced that the going forward the 7-20-4 Hustler will be a regular production cigar.   In the press release for the Dog Walker, Kendall commented, “The dapper rogue on the original 1890’s box label and its two-tone ‘barber pole’ wrapper have proven strong enough incentives to draw smokers to try our Hustler boutique cigar.  A stack of back-orders have convinced us to add them to our portfolio.”

The 7-20-4 Hustler in the toro size scored a 94 on Cigar Coop this past December.  The Hustler, including the new Dog Walker size will be fully available nationwide this August.

In terms of the Hustler, Kendall commented in the recent press release that the smoke is “Medium-bodied, with the spiral wrapper providing a visual emphasis to its swirl of complex flavors and aroma.”

Source: Information for this article was provided via press release to Cigar Coop.