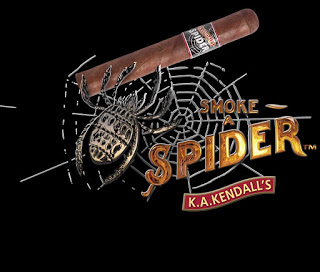 Kurt Kendall’s 7-20-4 Cigars is getting ready to release its long awaited Spider Cigar this August.  Information of this release was communicated via a press release to Cigar Coop.

Like other cigars in the 7-20-4 line, the Spider gets its name from an old cigar line in which Kendall acquired the naming rights to.  The original “Spider” originated in the 1930s in Somersworth New Hampshite, Kendall’s home state.

K.A. Kendall’s Spider becomes the fourth line to be released by 7-20-4 cigars.  This has been a long awaited release from the company.  It was at the 2012 IPCPR Trade Show in Orlando, Florida where 7-20-4 cigars was showcasing two new releases – the Hustler and the Spider.  Since then the Spider has been delayed, but a couple of weeks ago on CigarChat, National Sales Manager Rick Ardito indicated a late summer release was coming – which has been confirmed via the press release.  In the interim the company did a limited release to some shops in the New England area.

The Spider will be made in one size, a 6 x 52 toro.   It will be presented in a furniture grade Spanish cedar humidor with a glass lid that has the Spider logo etched in it.  An early version of this was shown at the 2012 IPCPR.

It is expected the Spider will be showcased at the 2013 IPCPR Trade Show.  Here are some of the particulars of the Spider:

In true 7-20-4 style, the Spider features a multi-national blend

The Spider is being launched in a single vitola – a 6 x 52 Toro.

Source: Some information for this article was communicated via press release by 7-20-4 cigars.