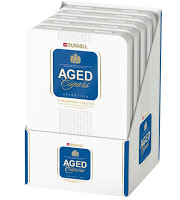 Dunhill has become an active brand in the past six months.  Late last year, the company released the limited edition Dunhill Aged Reserva 2003.  Earlier this year, a 6 x 60 vitola was added to the Dunhill Aged Series line.

The new size will launch at the 2013 IPCPR Trade Show this month and is scheduled for release in September.  The tin will have an SRP of $19.99 for the four cigars.

The Dominican tobaccos are described as “a special selection of Dominican Piloto Cubano and Olor tobaccos grown in the fertile Cibao Valley.”

As mentioned, the Calatas becomes the twelfth vitola in the Dunhill Aged Series line.