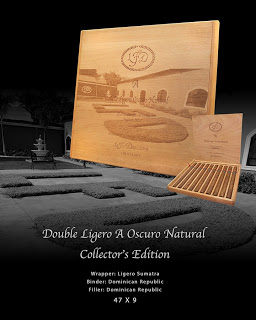 At the 2013 IPCPR Trade Show in Las Vegas, the company will launch two line extensions to its popular Double Ligero line. The first will be the return of the 9 x 47 “A” size vitola to the Double Ligero Natural line with some special packaging. The second will introduce a monster-size 8 x 54 vitola called the DL-854  Information on these new releases was communicated via a press release from La Flor Dominicana.

According to La Flor Dominicana, this is the firs time that  Double Ligero “A” has been rolled since 2008.   The packaging of the Double Ligero A Oscuro Natural will be in boxes of 10.  There will be an image on the cover of the box reflected the newly expanded La Flor Domincana factory.

As for the DL-854, there were not many more details other than it will be another full-bodied offering – and that the cigar would be launched at the trade show.   The cigar will be packaged in the cabinet style boxes common to much of the Double Ligero line. 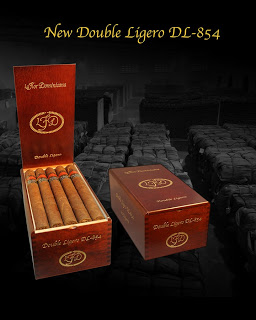 “At a glance”, we take a look at the Double Ligero line.

For completeness, here are the vitolas that have been released in this blend: