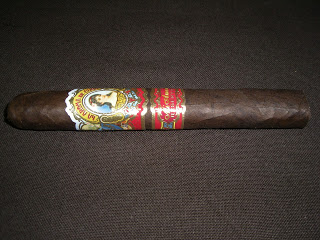 The La Aroma de Cuba Mi Amor line was originally introduced in 2010.  It was at the 2012 IPCPR Trade Show where the company launched their La Aroma de Cuba Mi Amor Reserva line.  The difference between the original Mi Amor line and the Reserva line was that The Mi Amor Reserva makes a blend variation – utlizing the same Mexican wrapper, but from a higher priming than the core Mi Amor.

The La Aroma de Cuba Mi Amor Reserva started out as an all box-pressed line.   The blend finished as our #16 Cigar of the Year countdown. The Pomposo becomes the first rounded format in the Reserva line.