The Nimmy D by Rocky Patel was one of several new releases by Rocky Patel Premium Cigars at the 2013 IPCPR Trade Show.  The cigar is a nickname for Rocky Patel’s cousin Nimish Desai. Over the past few years both Desai, and Patel’s brother Nish Patel have been playing an increasing role in the operations of Rocky Patel Premium Cigars.  Two years ago, both Desai and Nish Patel released their first namesake cigars – the Thunder by Nimish and the Xen by Nish Patel.  Both cigars scored Honorable Mentions in our 2011 Cigar of the Year countdown.  As a result, I was very curious to see what the two follow-ups to the namesake cigars would be.  I recently had a chance to smoke an IPCPR pre-release of the Nimmy D.  Overall, this was a cigar I found has some potential in the Rocky Patel portfolio and I found it deliverers some nice flavors.

The Nimmy D joins the Bold by Nish Patel as the 2013 namesake cigars by Desai and Nish respectively.  The company is branding these cigars under the umbrella “Patel Family”.  Whether the name Patel Family can be considered a line or not is unknown, but I think it is a step in the right direction in terms of brand building.  Both the Nimmy D and Bold will have a secondary band with the name “Patel Family” on it.

Let’s break down the Nimmy D and see what this cigar brings to the table.  Since the cigars smoked were pre-release samples, we will default to our pre-review format to share our thoughts and perspectives.  When the Nimmy D is released nationally, we will revisit this cigar and provide an assessment rating and numerical score.

For this cigar experience I smoked the Nimmy D in the toro size.  The Nimmy D’s Habano wrapper has a milk chocolate color with an oily complexion.  There are some visible veins on the surface of the wrapper.  I found the wrapper to be bumpy, but not toothy.  The wrapper seams are well hidden by the dark color of the wrapper.

The samples smoked did not have the final band artwork.  They had a temporary paper black and white  band.  The artwork for the packaging appears below. 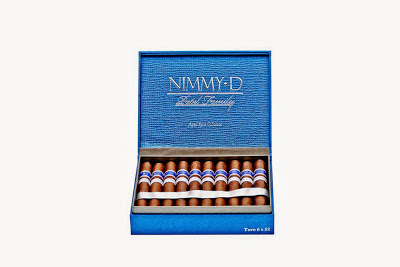 The Nimmy D started out with a very strong blast of black pepper.  The pepper blast does not recede quickly.  Some earth notes surfaced early on.  The earth notes increased throughout the first ten percent.    Around the 15 percent mark, some notes of dark chocolate and raw sugar cane emerged in the background, but the pepper notes were still very much in control.  The pepper was also very sharp on the retro-hale.

Toward the end of the first half, the pepper notes finally receded giving way to the earth notes. The pepper was a close second in terms of presence.  Meanwhile the chocolate and sugar cane notes continued to be a secondary note.

Around the halfway point of the Nimmy D, the chocolate notes joined the earth in the forefront. The pepper notes had now receded into the background while the sugar was more distant.

Toward the last third, the pepper slightly increased again.  The chocolate receded back into the forefront and the earth notes remained primary.  This is the way the flavor profile remained until the close of the cigar experience.  The end of the cigar had no harshness and demonstrated some good flavor.   The resulting nub was firm to the touch and cool in temperature.

It is important to know the samples smoked were pre-release.  When it came to the burn and draw, these were not quite at the level I would have liked them to be.  The burn did require several touch-ups to keep it straight.  While the touch-ups kept the Nimmy D relatively straight, there were more touch-ups than I preferred.  The resulting ash was firm.  The ash had a light gray color with some darker spots.  The burn temperature was ideal.

Overall, I found the draw to be looser than I prefer.  The burn rate was on the faster side and I attribute that to the looser draw.

Desai’s first release, the Thunder by Nimish was a smoke that was fuller in terms of strength and body. I found the Nimmy D to be somewhat dialed back – although it wasn’t a mild smoke by any means.  I assessed the strength to be on the upper end of medium.  As for the depth of the flavors, I found it to be in the medium to full-bodied range.  When looking at strength versus body with this cigar, I definitely gave the edge to the body.

Overall, I enjoyed the flavors of the Nimmy D.  In a lot of ways, I found the flavors to be even better then the Thunder by Nimish.  While I would still categorize the “burn” and “draw” is good, I’d still prefer to have these at “excellent”.  Since these were unbounded pre-release samples, it really isn’t fair to judge the final product – but that is why we opt to not score or rate a pre-release review.   In terms of the cigar itself, the Nimmy D is still something I can see being a product that either a novice or experienced cigar enthusiast can enjoy.  As for myself, I still look forward to the final product being released – and it is certainly something I’d smoke again.