The Kristoff Galerones DR4 is one of four new cigar blends that has bee introduced under Kristoff’s Galerones line.  The Galerones line is not just a set of new cigars, but it marks a radical change in direction for the products being released by Kristoff.  The Galerones line feature more sleek packaging, and incorporates tobaccos Kristoff has not previously used..  On top of that the Galerones is made in a different factory – Abe Flores’ PDR Cigars factory.  Each of the four blends of the Galerones line are distinct.  The Galerones DR4 represents an Ecuadorian Connecticut shade wrapper blend.  From our discussion this past June with company founder Glen Case, there was a lot of excitement from him about this project.  Today we take a closer look at the DR4. Overall, if the DR4 is indicative of things to come, the Galerones is off to a fine start.  Case has good reason to be excited, this is truly an excellent cigar and might represent one of Kristoff’s best to date.

As we mentioned, the four blends of the Galerones are distinct.  Each blend was built from the ground up.  With the case of the DR4, this one is a blend that goes after the market segment that wants a milder, yet flavorful cigar.

Without further ado, let’s take a closer look at the Kristoff Galerones DR4 and see what this cigar brings to the table.

The DR4 derives its name from the fillers as there are four distinct Dominican Habano Cuban seed tobaccos in the filler.  It uses a wrapper from Ecuador which appears to be a Conecticut seed shade grown wrapper.  On the Kristoff Brittania Reserva,  Kristoff also uses a Connecticut Shade grown wrapper, but from Honduras.

For this cigar experience, I went with the toro size of the Galerones DR4.  This wrapper was a light brown color.  It seemed a bit lighter in color than most Connecticut shade-grown wrappers.  The surface of the wrapper has a slight amount of oil.  I also found the surface of the wrapper a little on the bumpy side.  There are visible veins and visible wrapper seams.  While the Galerones line is geared at more sleek-like packaging, I found the DR4 had a little bit of rugged charm to the cigar itself.

The banding and packaging also have a big change when it comes to the Galerones Series.  The bands have more of a glossy look and this is reflected on the DR4.

Immediately below that band is a secondary band.  It has a black background as well.  The text “KRISTOFF” sits on top of the background in gold font.  Below that is the text “DR4” in white with gold trim, and just below that is Glen Case’s name in gold cursive font surrounded by a white stripe on each side..  To the left and right is the text “GALERONES” in a dull gold font.  There is also gold trim on the band.

The banding is also not the only thing different about the Galerones series.  For the boxes, Case moves away from the rough boxes packed with loose tobacco and has opted for sleek, gloss painted boxes. 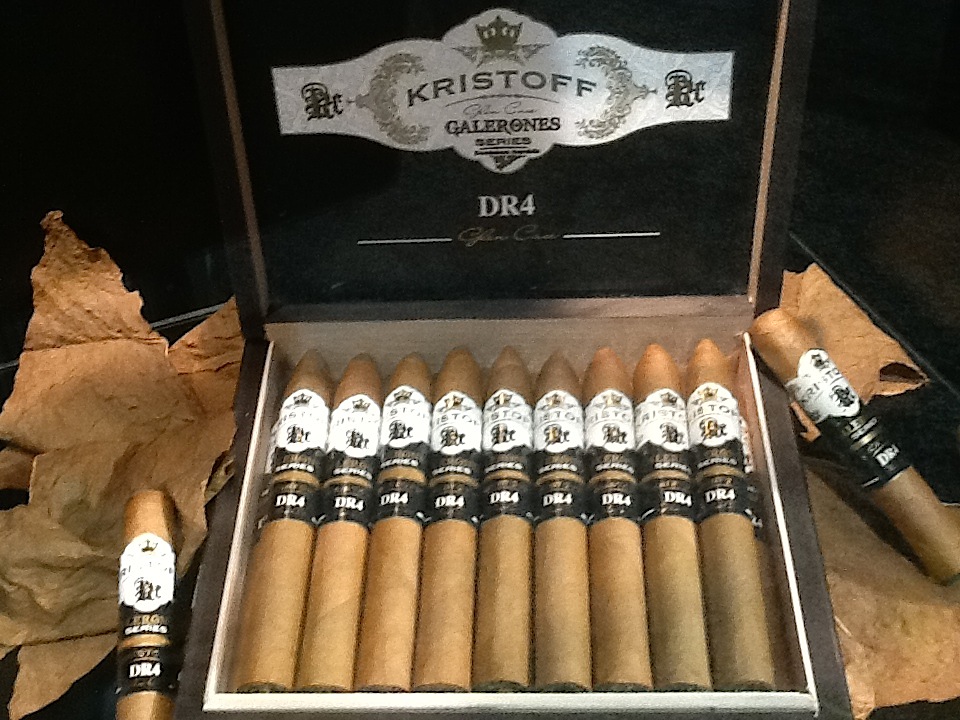 Prior to my lighting up the Kristoff Galerones DR4 Toro, I opted to go with a straight cut to remove the cap.  It was then on to the pre-light draw.  Overall, the dry draw notes were very typical of a Connecticut Shade grown wrapper blend.  It provided a mix of cream, wood, and a touch of cedar. Overall, I considered the pre-light draw to the DR4 to be solid.  At this point, I was ready to light up the DR4 and see what the smoking phase had in store.

The Kristoff Galerones DR4 started out with notes of black pepper and cream.  Once the pepper settled down, the flavors really opened up.  The primary notes were a mix of wood and cream.  By midway through the first third, the pepper was now more of a subtle note in the background.  The background also had notes of nut – and a very interesting natural tobacco sweetness.

The flavors pretty much held into the last third.  The spice slightly ramped up, but it was still creamy and sweet right until the end.  The end of the cigar was flavorful and not hash.  The resulting nub was cool in temperature and firm to the touch.

Overall, the Galerones DR4 scored nicely with the burn and draw attributes.  The DR4 had pretty much a straight burn from start to finish – requiring minimal touch-ups.  The resulting ash was on the firm side.  The ash also had a salt and pepper color to it.  The burn rate and burn temperature were both ideal.

From a draw perspective, the DR4 was not too loose and not too tight.  It was definitely a low maintenance cigar to puff on.

From a strength perspective, the DR4 was medium from start to finish.   As for the flavors, there was some definitely depth to them.  I found the DR4 also started out in the medium-bodied range. In the last third, I found that the flavors increased into the medium to full-bodied range.  Overall the strength and body balanced each other well with the body getting the edge in the last third.

At the time this assessment was written, the DR4 was the first of the Galerones series I had smoked.  Overall, this cigar provided a great introduction to this line of cigars for me.  I found the Galerones DR4 to deliver a lot of classic flavors you get from Ecuadorian Connecticut shade-grown wrapper cigar, but it was the sweetness from this cigar that really was a differentiator.  It wasn’t an overpowering sweetness, but I found it to be different.  In a way, I felt this helped Case achieve his goal of doing something totally different for Kristoff with the actual cigar itself.   The strength and body were a little higher from the norm of a Connecticut Shade. As mentioned, I’m curious on the aging potential here.

This is a cigar I would easily recommend to a novice cigar enthusiast – especially one looking to graduate to something medium.  An experienced cigar enthusiast, who enjoys a flavorful Ecuadorian Connecticut Shade cigar should like this one.  As for myself, this is a cigar I can see smoking again – and one definitely worthy of a box split.

Source: The cigars for this assessment were purchased at Burners Cigar Company in Huntersville, NC