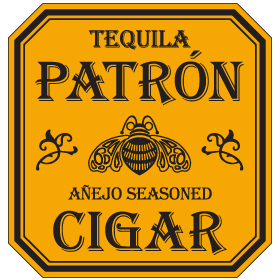 Ted’s Cigars has entered into a licensing agreement with  Patron Tequila.  Under this agreement the world of premium tequila and handmade cigars are brought together with the release of the Patron Anejo Seasoned Cigar.

The Patron Anejo Seasoned Cigar is focused around Patron’s Anejo spirit.  The Anejo is aged in small white oak barrels for a minimum of twelve months.  The barrel aging gives it an oaky flavor, but it is also known for its sweet flavors and smoothness.

Consistent with many of its other product lines, the Patron Anejo Seasoned Cigar will be packaged in individual glass tubes where no humidor is required.  The cigars are sold in singles, boxes of 3, boxes of 10, and boxes of 25.

At a glance, let’s take a closer look a the Patron Anejo Seasoned Cigar by Ted’s Cigars:

The  Patron Anejo Seasoned Cigar is available in a single size – a 6 x 50 Toro.