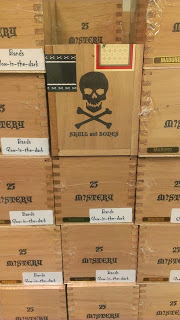 As the name indicates, some of the details of the M?stery 2013 are being held back.  Viaje president Andre Farkas has not disclosed what the shape and size of the M?stery 2013 will be.  He did indicate two things:  First as with some of the Skull and Bones that have been released around Halloween, the cigar will contain a glow in the dark band.  Secondly, Farkas did note that the M?stery 2013 will contain a maduro wrapper – which was introduced with the Viaje Skull and Bones M?stery and M?stery BP releases in 2012.

For the first time since the M?stery 2010, Farkas is publicly announcing only one size of the M?stery.  Back in the February 2013 shipments of Skull and Bones, Farkas announced two size and then quietly shipped a third size called Big Ivan.

The The Skull and Bones M?stery 2013 is shipping with the new Viaje Full Moon and the Viaje WLP Stuffed Turkey 2013.

At a glance, here is what is known thus far about the Viaje Skull and Bones M?stery 2013.

While no blend details were listed, typically Viaje has used San Andres Mexican maduro for its wrappers over Nicaraguan binder and filler for its maduro releases.

As mentioned, Viaje has not announced the front mark for the M?stery 2013

Update 10/27/13 – Viaje has shipped the Skull and Bones M?stery 2013.  This appears to be a 5 x 50 sized Robusto.  There has been no official announcement of the vitola dimensions.

Wth the exception the M?stery maduros in the seventh and ninth release cycles, all Skull and Bones have been Nicaraguan puros featuring a criollo wrapper.