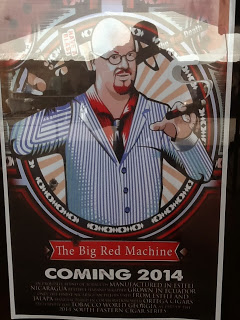 At Tobacco World’s 15th Anniversary event in Marietta, Georgia, pre-orders were taken for “The Big Red Machine”.  The cigar is being produced by Ortega Premium Cigars as a part of the 2014 South Eastern Series.  The South Eastern Series will provide a different cigar blend for four retailers in the Southeast United States.  The cigar releases will parallel themes that Ortega used in the Ortega Wild Bunch 2013 series.
The cigar is named for Red Grantham, the owner of Tobacco World.  The Big Red Machine will be released in four vitolas with one vitola being released per quarter.  Pre-orders were being taken for the first quarter release which is a Churchill size.
At a glance, here is a look at “The Big Red Machine”:

Editor’s Note:  Shortly after this story was printed, another media source printed a similar story, but questioned some of the information our report.  In a follow-up conversation between Cigar Coop and Ortega Premium Cigars’ president Eddie Ortega, he confirmed the information in this story is valid and told me we could “print it”.