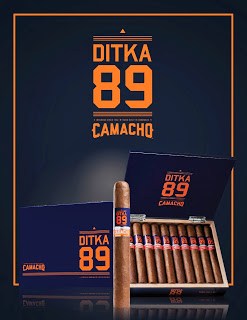 The Ditka 89, the fifth installment in Camacho’s Mike Ditka line of cigars is scheduled to make its way to retailers in late November.  The release is meant to coincide with Ditka’s upcoming jersey/number retirement ceremony on December 9th at Soldier Field in Chicago.

Back in September, word first surfaced from Camacho Cigars on the Ditka 89. Over the course of the past year, Camacho has launched the Ditka line of cigars that pays homage to NFL Hall of Famer Mike Ditka.  The Ditka 89 joins the other four blends in the line: The Player, The Coach, The Hall of Famer, and the Throwback.  Each of these blends have been limited production.

The number 89 represents Ditka’s number when he played Tight End for the Chicago Bears.

The Ditka 89 is a maduro cigar and will be a limited production cigar – with 2,000 boxes of 20 produced for a total of 40,000 cigars.  The company describes the cigar as “four out of five on our intensity meter.”

At a glance, here is a closer look at the Ditka 89:

The blend of the Ditka 89 is a multi-national blend: