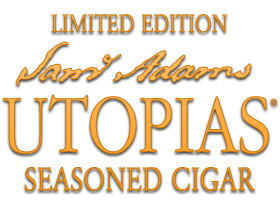 This past week, Ted’s Cigars has announced it is teaming up with Samuel Adams for its latest seasoned cigar.  The Samuel Adams Utopias is a limited edition cigar based on the annual release of the malt beverage with the same name that is released by Boston Brewing Company.

Samuel Adams Utopias was first released in 2002 and since then it has been an annual release.  The Utopias is regarded as one of the strongest mainstream beers as it has been made with an alcoholic content of up to 27%.

2002 with Utopias; at 24% abv, it was marketed as the strongest commercial beer in the world.  Boston Brewing Company has subsequently released new “vintages” of Utopias annually, increasing the alcoholic content to 27% abv by 2007.

The Utopias is a seasoned cigar.  The seasoning of the blend is done through a proprietary aromatic process by Ted’s cigars. The cigar is intended to be either paired with the Utopias malt beverage or enjoyed stand alone.

Ted’s Cigars’ has described the cigar as “limited edition” with availablity throughout the months of November and December at selected retailers.  It is the latest release in what has been a busy 2013 for Ted’s Cigars.   During this year Ted’s has released the Duck Commander and Patron Anejo Seasoned Cigar.

At a glance, here is a look at the Samuel Adams Utopias by Ted’s Cigars.

The blend features a combination of Ecuadorian and Dominican tobacco.

The Samuel Adams Utopias cigar is available in one size – a 6 x 50 toro.  Consistent with many Ted’s Cigars’ products, the Pamuel Adams Utopias Cigar will be packaged in individual glass tubes where no humidor is required.  The cigars are sold in singles, boxes of 3, boxes of 10, and boxes of 25.