Comador Cigars will be launching their first cigar, the Cohiba Comador.  This cigar is a joint collaboration being done with the General Cigar’s Cohiba brand and musician Shawn “Jay Z” Carter.  Information on this announcement was formally made in a press release by General Cigar Company.

The cigars are available for direct purchase from the company as well as Club Macanudo and 40/40 Club in New York.  It will also be available at select Barney’s retail locations until January 2nd, 2014.  CNBC.com is also reporting that there are plans to move the product into retail stores in 2014.  The cigar has also recently been showcased at events in Atlanta, New York, and Las Vegas over the past few months.  The cigar is being positioned as an ultra-premium cigar.  At press time the cigar is available in several gift packs directly from Comador cigar.

In the press
release announcing the Cohiba Comador, Dan Carr, president of General
Cigar commented, “As a visionary, artist and connoisseur, JAY Z is the
epitome of modern luxury and the ideal partner for Cohiba. JAY brought
tremendous creativity to the development of Comador, and we responded by
leveraging Cohiba’s assets to deliver an amazing cigar using rare,
proprietary tobaccos, with contemporary, urbane packaging.”

Jay Z and Cohiba spent two years collaborating together to develop the
cigar’s flavor and characteristics.  In the press release by General
Cigar, Carter said, “I worked with Cohiba because I knew they’d take my
vision of a luxury cigar and bring it to life in the right way. We took
our time working on this, to get the blend to exactly where I wanted it
to be. Comador looks and tastes the way I think a cigar should.”

There will be three luxurious packaging options.   The Comador Robusto box will contain a wheel of seven Comador cigars housed in a vertical-format box with a SRP of $210.00.

The Comador will also be available in the Comador Travel Humidor.  It will also contain seven Comador cigars and have an SRP of $350.00. 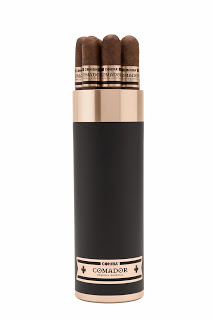 Finally, there is a Comador Humidor.  According to the press release this humidor “is bound in hand-finished leather with a sleek, metallic Shawn Carter
Collection crest that opens vertically to reveal 14 meticulously
constructed cigars. Seven additional Comador cigars are contained
inside the enclosed hand plated travel humidor which is lined in
Spanish cedar. Mahogany-lined doors, custom cedar trays and a
humidification unit comprise the exquisite humidor which contains 21
cigars, with the capacity to house 63 cigars. Only 350 humidors have
been made to commemorate the launch of Comador. This limited edition
statement piece is available for a suggested retail price of $999.” 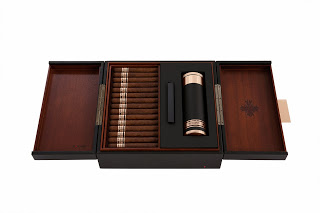 At a glance here are the details of the Cohiba Comador cigar:

At press time, the Cohiba Comador is being launched in one size – a 6 x 52 toro.

Updated story with information from a press release from General Cigar Company.  All photos provided by press release unless specifically noted.