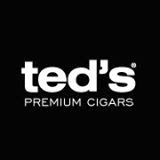 Ted’s Cigars once again is teaming up with Boston Brewing Company’s Samuel Adams brand to introduce its second collaboration for a seasoned cigar.  The Samuel Adams Brewlywed Ale Seasoned Cigar is based on the annual limited release beer.  The cigar will be released on June 16th.

The Brewlywed Ale is a one day limited release that occurs at the Boston Brewery.  This year will mark the third year of this release as it is scheduled for June 18th.  It is based on an emerging tradition of couples having special home-brewed micro beets at their weddings.

The Samuel Adams Brewlywed Ale Seasoned Cigar ties in the theme of having cigars at weddings with the new trend of these microbrews.  It is meant to complement the profile of the Samuel Adams Brewlywed Ale drink.  It is being made for a limited run throughout the summer while supplies last.  The cigar itself is a seasoned cigar to reflect the character of the beverage.

Late last year, Ted’s Cigars teamed up with Samuel Adams for the Samuel Adams Utopias Cigar. This was another limited run seasoned cigar based on a limited beer release by Samuel Adams.

At a glance here is a look at the Samuel Adams Brewlywed Ale Seasoned Cigar:

Blend ProfileThe cigar is being manufactured in the Dominican Republic.Wrapper: Honduras Corojo 98 wrapper
Binder: Ecuadorian Connecticut
Filler: Dominican Republic Piloto Cubano & Criollo 98
Vitolas Available
The Samuel Adams Brewlywed Ale Seasoned Cigar is available in one size – a 6 x 50 toro.  Consistent with many Ted’s Cigars’ products, the Pamuel Adams Utopias Cigar will be packaged in individual glass tubes where no humidor is required.  The cigars are sold in singles, boxes of 3, boxes of 10, and boxes of 25.  The individual cigar is priced at $11.00.