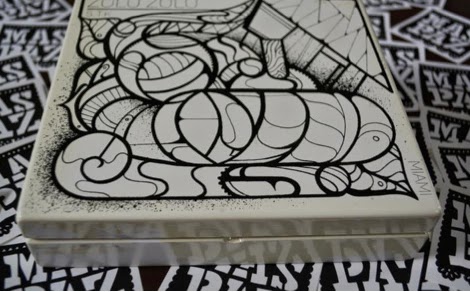 George Rico’s G.R. Tabacaleras Co has announced the the new George Rico S.T.K. Maz Paz Edition.  Last month we reported that George Rico’s Zulu Zulu STK project will be returning, but it would be rebranded as the Mas Paz Edition – featuring new art work and a new charitable cause behind it.

According to G.R. Tabacalaeras Co, the Mas Paz Edition 2014 will have identical blends to the Zulu Zulu blends, but will now be made at the G.R. Tabacaleras factory in Little Havana, Miami. These blends featured either an Ecuadorian Connecticut or Nicaraguan Habano wrapper.

The new charitable cause will be used to fund renovations for La Casa de la Madre y el Nino, an orphanage in Bogota, Colombia.

The new artist is Colombia-born street artist and Arlington, Virginia native named Federico Frum – better known as Mas Paz.  He was actually adopted from La Casa de la Madre y el Nino when he was one years old.  He grew up in the United States and received his formal art training at George Mason University.  After designing in New York City for several large companies, he went on a six month journey throughout South America that forever changed his life. Frum now travels the world using his art to inspire and transform neighborhoods in the developing world. He is also a strong advocate for youth in our own communities in the United States, working with kids in local schools and community centers to teach and raise funds, making art classes more accessible to all.

Mas Paz’s art work will receive new artwork on the boxes and bands.

G.R. Tabacalaeras is now accepting pre-rders for the Mas Paz Edition 2014, so it is anticipated this cigar will be showcased at the 2014 IPCPR Trade Show next week in Las Vegas.