The La Jugada Nunchuck is the third blend to be released by Moya Ruiz Cigars. This is as ambitious as a project that has been seen in recent time in the cigar industry. The idea was to create a limited edition cigar for the Cigar Dojo social media community.  Keeping with the martial arts theme, co-owners Danny Moya and Nelson Ruiz decided to design a cigar that resembled a nunchuck pair. As they have done with their first release two releases, they turned to Erik Espinosa and his La Zona factory to turn this vision into reality. The end result is the La Jugada Nunchuck – which is a pair of cigars joined by a connecting fuse. The Nunchuck is a limited edition cigar that has recently been soft-launched to the Cigar Dojo community as well as select retailers with a plan to sell the remaining allotment at the 2014 IPCPR Trade Show. Recently, I’ve had an opportunity to smoke this cigar. Moya Ruiz was one of the Cigar Coop 2014 Five Boutiques to Watch – and with good reason as they have delivered two excellent releases with the La Jugada Prieto and La Jugada Habano. The good news, the Nunchuck keeps the momentum going delivering an excellent product that was an enjoyable smoking experience.

In addition to the Nunchuck being the company’s first limited edition cigar and being a tribute to Cigar Dojo, there are some additional firsts for the company with this release.  First up, it marks the first Nicaraguan puro to be produced by the company.  Secondly, it marks the most full cigar in terms of strength and body released by Moya Ruiz. 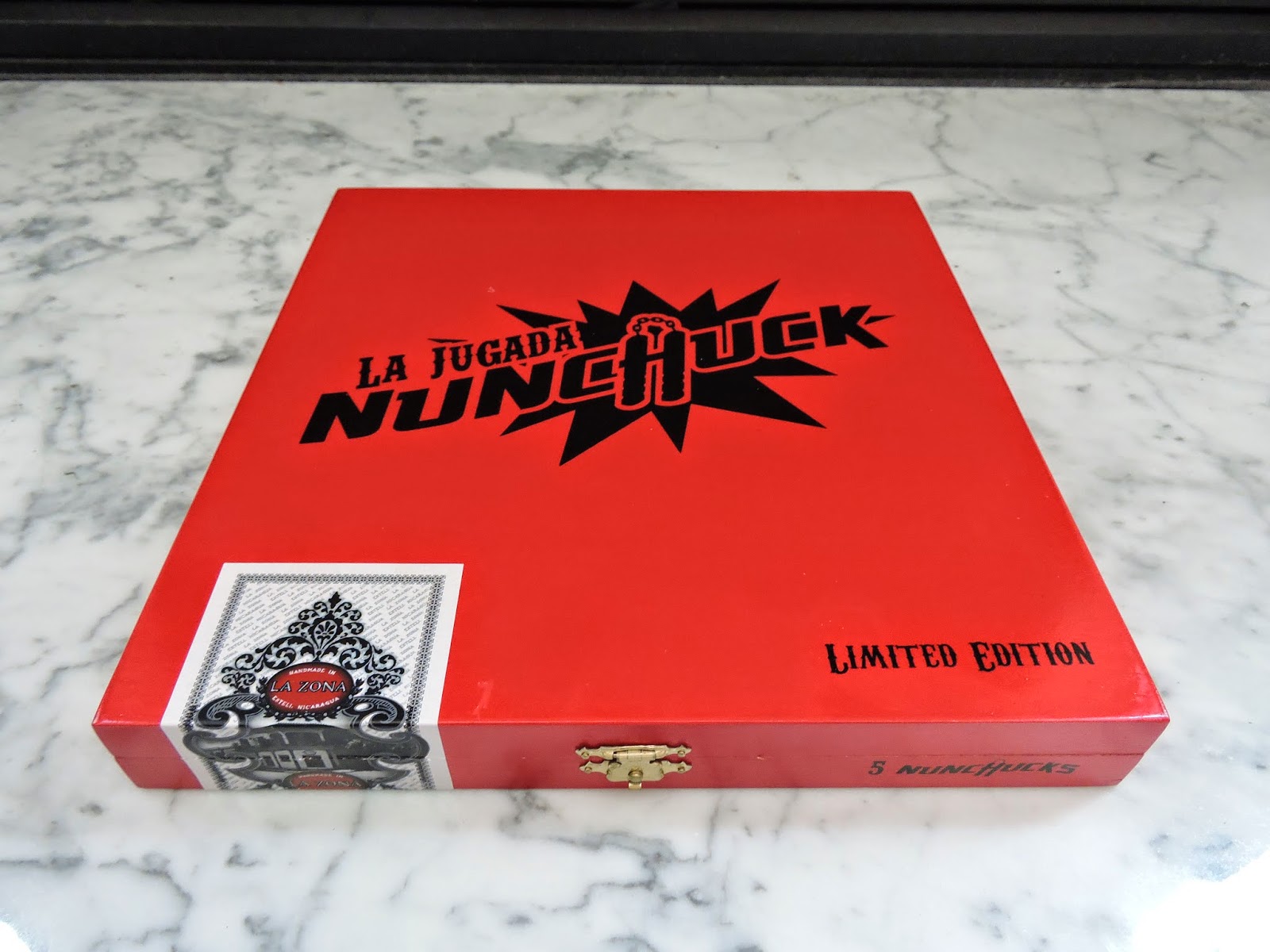 The Nunchuck was placed under the La Jugada line – which is the company’s only line.  The name La Jugada means “move” or “play” and comes from the two principal owners love of the game of dominoes.

Without further ado, let’s break down the La Jugada Nunchuck and see what this cigar brings to the table.

As mentioned above, the La Jugada Nunchuck is Moya Ruiz’s first Nicaraguan puro:

The La Jugada Nunchuck comes in one size measuring 7 x 54.  Since the cigars are fused together, each Nunchuck is sold as a pair of cigars.  There are 5 Nunchuck pairs (ten cigars) per box and a total of 1,000 boxes (5,000 Nunchucks, 10,000 cigars) have been produced.

In terms of the individual cigar, the La Jugada Nunchuck, the Habano Oscuro wrapper has a medium brown color color that almost is dark-caramel like.  There is some oil on the surface of the wrapper.  There are some visible veins that are on the thinner side as well as some visible wrapper seams.

To fuse the cigars, a thicker tobacco leaf stem is used to join the two cigars in place.  The stem is designed to easily be pulled off between the two cigar making up the Nunchuck.

There was definite care in how the cigars were packaged to prevent the two cigars from separating.  The two cigars are surrounded with a paper sheath that is the same design as the band on the cigars. 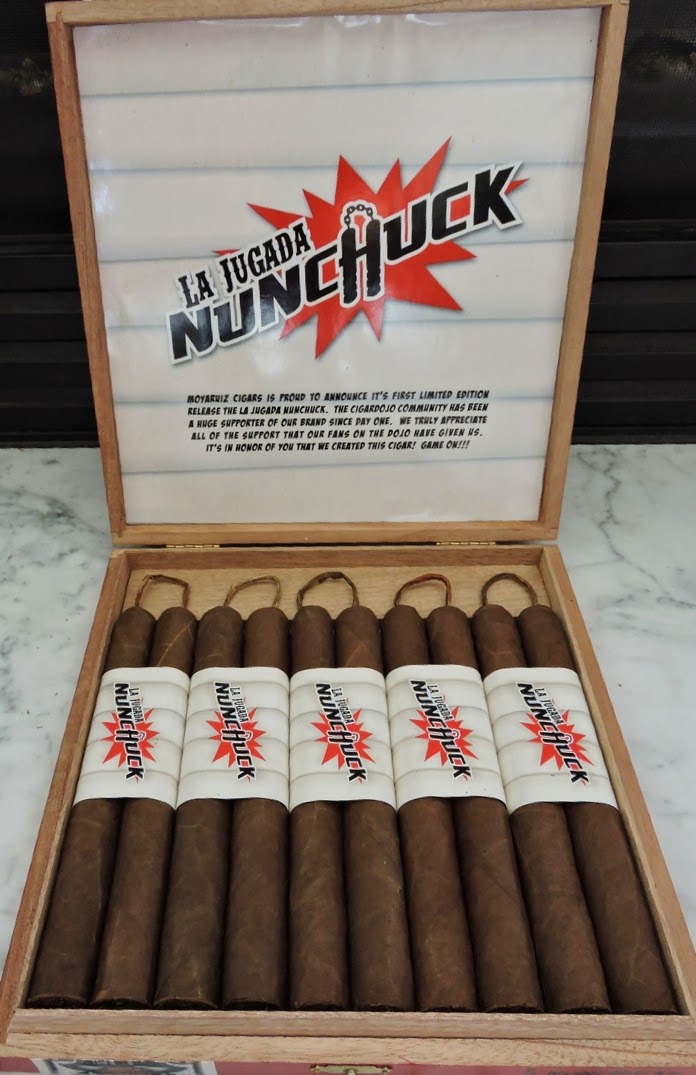 The band features has a white and gray striped gradient color scheme to it.  In the center of the band is a red “pow/impact” like logo with the text “LA JUGADA NUNCHUCK” on it.  The “H” in “NUNCHUCK” is larger with a chain on each end.  The sheath surrounding the Nunchuck pair has the same design on it as well.

The first step was to separate the pair on Nunchuck cigars and pull the stem out of the cigar. I then moved on to placing a straight cut into the cap of the cigar. Once the cap was removed, I started the pre-light draw. The cold draw provided notes of cedar along with some notes of earth. I also detected a slight graham cracker and floral note. Overall I considered the pre-light draw of the Nunchuck to be very good. At this point I was ready to light up the Nunchuck and see what the overall smoking experience would have in store.

The start to the Nunchuck provided a nice dose of spice to start.  The spice notes had a mix of cedar, black pepper, and floral spice.  The spice was soon joined by some notes of natural tobacco.  In the early stages of the first third, the cedar notes moved to the forefront and took on a combination of cedar. nut, and natural tobacco.  The pepper notes subsided into the background. The retro-hale had a combination of pepper and cedar spice.

As the Nunchuck moved through the later stages of the first third, the natural tobacco provided some sweetness enhancing the cedar and nut flavors up front.  The second third continued with the same flavor profile, but now I detected some of the graham cracker notes in the background that were similar to what I got on the pre-light.  These notes along with the natural tobacco gave this cigar the right amount of sweetness.

The last third saw a return so a spicy profile with a mix of cedar / pepper spice.  The natural tobacco and graham cracker notes were now more distant.  This flavor profile held right until the end.  The spice did get a little harsh at the end.  The resulting nub was soft to the touch and slightly warm in temperature.

The burn line remained relatively straight from start to finish with some minor curvature along the way.  This didn’t require much in the way of any major touch-ups to keep in on track.  The resulting ash was a salt and pepper color.  The ash itself remained remained more on the firm side, but it did have a couple of loose moments during the smoke.  The burn rate was ideal.  The burn temperature was also ideal for most of the cigar experience, but did get slightly warm toward the very end.

The draw was ideal as well.  It was not too tight and it was not too loose.  This made the Nunchuck a low maintenance cigar to derive the flavors from.

As advertised the La Jugada Nunchuck was definitely the most full in terms of strength and body of the three lines made by Moya Ruiz.  I found this to have enough strength to qualify as a full strength cigar from start to finish.  As for the body, the retro-hale is going to be key here.  The Nunchuck will deliver a full-bodied smoke, but this definitely helped by retro-haling this cigar as this will help get the full effect of the flavor depth.  Overall, while the Nunchuck has some power it doesn’t not assault the pallet and it balances with the body nicely.

I am curious to see what age does to this blend and I can see both the strength and body dialing back somewhat.

From looking at the La Jugada Nunchuck, it is nearly impossible to not be blown away by the design of this cigar as well as the packaging.  Once you pull apart the Nunchucks, it is all about this Nicaraguan puro that is being smoked – and it delves a solid smoking experience.  Looking at this cigar strictly on the merit of the smoking experience (note: Cigar Coop doesn’t score packaging or appearance), this cigar was an extremely enjoyable cigar.  The only negative I saw was that the cigar got a little warm and harsh at the very end.  If you like a full strength, full-bodied smoke that is a Nicaraguan puro, this is going to be an enjoyable smoking experience.  At the same time, I do wonder what this cigar will due over time and I think the aging potential is high with this blend.

Given this is a full strength, full-bodied smoke, I would recommend this to a more seasoned cigar enthusiast – especially one who likes this profile.  As for myself, whether this cigar was Nunchuck or not, I’d easily smoke it again.  It’s certainly worth a box split in my book.

News: Moya Ruiz Cigars Officially Announces La Jugada Nunchuck (Cigar Preview)
Price: $23.50 (pair of Nunchucks)
Source: Sample Provided by Manufacturer (*)
Stogie Geeks Episode: n/a
Stogie Feed: n/a* Cigars for this assessment was provided by Moya Ruiz Cigars. The samples were received in order to provide feedback.  Cigar Coop is appreciative for the samples, but in no way does this influence this write-up.