The Viaje Zombie Antidote is the latest installment into the Zombie line of cigars in the Viaje portfolio.  If you watched Episode 86 of Stogie Geeks back on February 27th, you learned that this was an upcoming release for 2014.  With the exception of the Viaje Zombie Super Shot, the Viaje Zombie line has been limited to only a handful of retailers. However in the case of the Antidote, it follows the Zombie Super Shot as being made available (in limited quantities) to all Viaje authorized retailers.  While Farkas has kept much of the details of this cigar under wraps, we do know this is the longest and thinnest vitola of the Zombie line measuring 6 1/4 x 44.  Recently I’ve had a chance to smoke the Viaje Zombie Antidote.  Overall, I found this to be a very good addition into Viaje’s lineup.

As Farkas told us on Stogie Geeks, there is an on-going story that ties several of his blends together. The story goes that Viaje WMD (Weopan Mass Destruction) explodes. Because of radiation from the explosion, people end up mutating into “Zombies“.  The Zombie Super Shot helps arm people for what Farkas calls the “Zombie Apocalypse”.  The only way to cure the Zombies is with the Zombie Antidote.

Without further ado, let’s break down the Viaje Zombie Antidote and see what this cigar brings to the table.

There have been no specific tobaccos disclosed around the Zombie Antidote.  Typically Farkas leverages Aganorsa leaf tobacco for his blends from Nicaragua, so its a safe assumption this holds true for the Antidote.

As mentioned, the Viaje Zombie Antidote measures 6 1/4 x 44.  The cigar has a tapered foot.  This cigar seems to combine a lonsdale format with an inverse torpedo.  As Farkas showed us on Stogie Geeks, the Antidote has the appearance of a syringe. 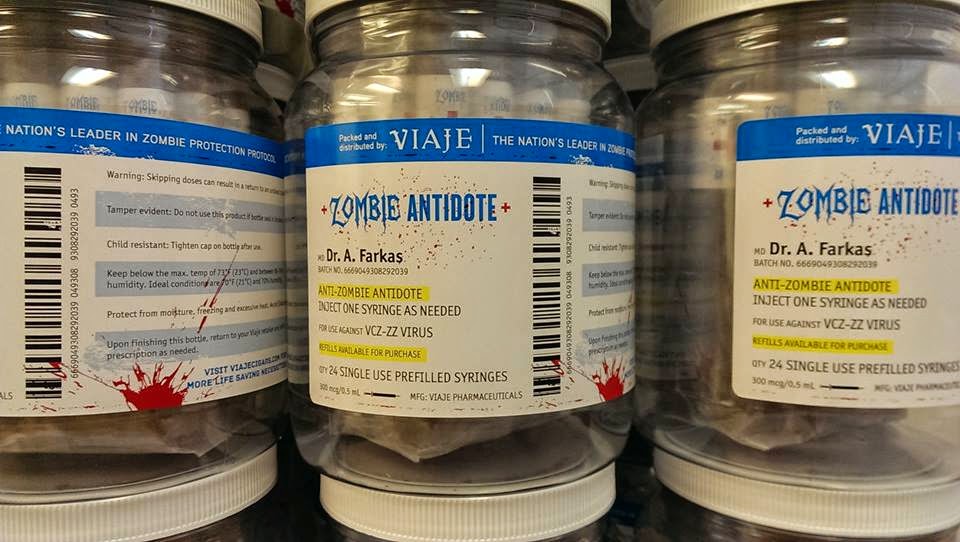 The band has a white background with a large red cross at the center.  Above the cross is the text “ZOMBIE” in a blue near-gothic style font. Below the cross is the text “ANTIDOTE” in more of a classic blue font.  There are some red spots splattered across the band giving almost an appearance of a blood-like effect.  On the far right of the band is the text “SINGLE DOSE” in black font that is highlighted in yellow.  Below that text is the text “VIAJE” in the company’s logo font with the text “PHARMACEUTICALS” in a smaller font.  The reference to “single dose” made be wonder if somewhere down the road if we could see something along the lines of a “double dose”.

Farkas has been on record saying this release of the Viaje Antidote will be the only version with this particular band.

Prior to lighting up my Viaje Zombie Antidote, I went with my usual choice of a straight cut.  Once the cap was successfully clipped, I moved on to the pre-light draw ritual.  The dry draw provided some notes of cherry sweetness, cream, earth and a slight amount of pepper.  Overall I considered the pre-light draw of the Antidote to be satisfactory.  At this point I was ready to light up this cigar and see what the smoking stage would deliver.

The start to the Viaje Zombie Antidote continued with the notes of cherry, earth, cream, and pepper that I got on the pre-light draw.  The earth notes soon turned more wood-like.  There was no dominant flavor in the early stage.  The retro-hale also had a combination of wood and pepper spice.

The last third saw the pepper notes move back toward the forefront – inching closer to the wood and cedar notes.  However the pepper never got overpowering at the end.  There was still some natural tobacco sweetness in background.  This was the flavor profile as the Zombie Antidote came to a close.  The resulting nub was firm to the touch and cool in temperature.

In terms of the burn, the Viaje Zombie Antidote scored very nicely.  While there was a slight curve on the burn line, I still found the Antidote burned mostly on the straight side – requiring minimal touch-ups.  The resulting ash was on the firm side.  The ash had a charcoal gray color with some darker streaks mixed in.  The burn rate and burn temperature were ideal.

The draw to the Viaje Zombie Antidote scored nicely as well.  It was not too tight, and not too loose – making for an enjoyable smoke from start to finish.

While I did find the Zombie Antidote to have a very different flavor profile compared to other Zombie releases, the other noticeable difference was how much more this cigar was dialed back compared to the other Zombie releases.  I pretty much assessed this to be a medium strength, medium-bodied smoke from start to finish.  I found a nice balance between the strength and body existed throughout the smoking experience.

While Farkas and Viaje have built a reputation for full and powerful smokes, 2014 is showing some great work by the company with blends that are more on the medium side.  This cigar and the Viaje Plata are two such examples.  One other thing I did notice is that this cigar did seem to need to sit down for a few weeks.  I found the Antidote smokes that I rested for about four weeks provided a significantly better smoking experience. Like many Viaje cigars, my gut tells me this improvement will continue to improve with age, so there may be more to look at.  This is a cigar hat I’d recommend to either a novice or experienced cigar enthusiast.  As for myself, this cigar is definitely worthy of a fiver – and it’s one I look forward to smoking again.