At the 2014 IPCPR Trade Show, A.J. Fernandez Cigars announced the launch of a new line of cigars called the A.J. Fernandez New World.  The cigar is significant for two reasons.  First, it marks the first project that master blender A.J. Fernandez would collaborate with his father, Ismael Fernandez.  Ismael recently came out of retirement after a 17 year stint with Plasencia.  Second, the New World is a value-priced cigar – coming in around $6.00.  Recently, I’ve had an opportunity to smoke the A.J. Fernandez New World.  Not only did I find a cigar of terrific value, but I found a cigar that delivered an all-around outstanding cigar experience.

When the New World was announced, A.J. Fernandez Cigars explained the significance of the name New World and how it ties in with cigars:

Without further ado, let’s take a closer look at the A.J. Fernandez New World and see what this cigar brings to the table.

Blend Profile
As mentioned above, the A.J. Fernandez New World is a Nicaraguan puro:

The A.J. Fernandez New World will be packaged in 21 count boxes.  All sizes are box-pressed. Three of the four sizes will come in a 55 ring gauge – the exception being the 58 ring gauge Virrey.

For this cigar experience, I smoke the Navegante, which is the Spanish name for “Navigator”.   The dark Nicaraguan wrapper has a nice chocolate bar color to it.  Upon closer examination, there is some darker marbling that can be seen on the surface.  There is a slight amount of oil on the surface.  The box-press is firm and has a few number of veins and a few number of wrapper seams. 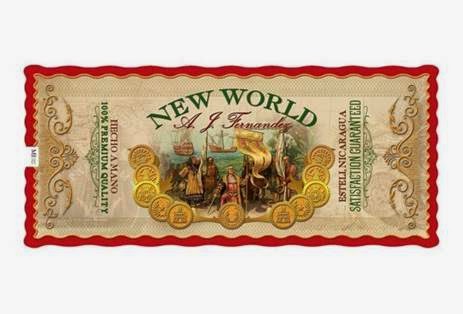 Prior to lighting up my A.J. Fernandez New World Navegante, I went with a straight cut.  After clipping the cap, I moved on to the pre-light draw.  The cold draw provided notes of dark chocolate, earth, and a mild spice note.  Overall I considered the pre-light draw to the New World to deliver some outstanding flavor.  At this point, I was ready to remove the footer ribbon, light up the New World and see what the smoking phase would have in store.

The start of the A.J. Fernandez New World provided some more of the dark chocolate, earth, and mild pepper notes that I detected on the pre-light draw.  In the early stages, the chocolate notes took on a smooth and creamy profile.  At the same time, the earth notes were present with the chocolate notes in the forefront.  The pepper notes were a close secondary.  In the more distant background I picked up a maduro-like sweetness (what I call a cross of black cherry and natural tobacco).  Meanwhile the retro-hale produced what I would term a subtle herbal spice.

In the second third, the maduro sweetness moves into the forefront and is joining by the earth and pepper notes.  The chocolate notes recede to more of a secondary note.  Meanwhile the retro-hale began to pick up and now delivered a more of a classic black pepper flavor.

Toward the last third, I found the A.J. Fernandez New World to deliver a stronger dose of pepper. The chocolate, earth, and maduro sweetness were all significantly in the background. This is way the cigar experience came to a close. While there was plenty of spice, there was no harshness. The resulting nub was firm to the touch and cool in temperature.

The A.J. Fernandez New World does very well when it comes to its construction. This is reflected nicely in the burn and draw attributes. The burn line remained on the straight side from start to finish. While it did have a slight curvature, the cigar was never in danger of tunneling or canoeing. The resulting ash had a salt and pepper color. It wasn’t an overly firm ash, but it wasn’t one prone to flaking or flowering. The burn rate and burn temperature were ideal.

The draw performed very well.  This was a very low maintenance cigar to puff on and derive flavor from.  As a result the New World was an enjoyable smoke from start to finish.

This cigar is going to deliver a nice dose of both strength and flavor – with neither attribute overwhelming.  From a strength perspective, the New World delivers a medium to full experience from start to finish.  On the flavor side, I found the notes to have some nice depth and have a decent amount of weight on the pallet.  I assessed the New World as being a medium to full-bodied smoke.  Toward the last third, the flavors do progress into the full-bodied range.  Overall the New World is a cigar where the body will have a slight edge over the strength.

The 2014 IPCPR Trade Show was my first experience smoking the New World.  During this time I smoked quite a few cigars, but the New World was one that stood out while walking the floor…  Upon returning home and seeing these in the retailer’s humidor,  I was anxious to smoke this again.  This time, on a fresh pallet, the New World was an even better cigar.  While this cigar scores nicely in a lot of areas, it is in the area of flavor where this cigar really shines.   The $6.00 price point is a nice bonus on top of everything – and there is no doubt the value is there with this cigar.  While this is normally a cigar that is a little fuller and a little stronger than I would recommend to a novice, I wouldn’t discourage one from trying it.  I found this a great cigar to “graduate” to something fuller and stronger.  Experienced cigar enthusiasts will enjoy this cigar.  As for myself, this one is a winner by A.J. Fernandez.  It easily is worthy of a box purchase in my book.