As the name indicates the E.P. Carrillo 5 Year Anniversary commemorates the fifth anniversary of E.P. Carrillo Cigars. It was back in 2009 when Ernesto Perez-Carrillo, announced he was leaving General Cigar to form his own company. Later that Fall, his new company E.P. Carillo released its first cigar, the E.P. Carrillo Edicion Inaugural 2009. Since then, each Fall the company has released a single vitola, limited edition cigar.  From 2010 through 2013, this has been known as the Edicion Limitada series. While the E.P. Carrillo 5 Year Anniversary doesn’t carry the Limitada name, it fills the role as this year’s Fall release.  Regardless of how this is branded, one thing is that this cigar stands out. This is an excellent cigar worthy of being commemorating something such as five year anniversary – and one of the best values out there.

Word first surfaced of the 5 Year Anniversary project just prior to the 2014 IPCPR Trade Show.  It was at the trade show where the company showed off the cigar for the first time.  A total production of 3,000 boxes of ten were produced.  The cigars also carry a very attractive price point of $8.50.

Without further ado, let’s take a closer look at the E.P. Carrillo 5 Year Anniversary and see what this cigar brings to the table.

While Ecuadorian Sumatra has been a staple of Perez-Carrillo blends for a while, it is the first time it is being used on one of the annual fall limited edition / limitada cigars (it has been used on the company’s other annual edition line released in the Spring – the Short Run).  The blend also features an Ecuadorian Corojo leaf for the binder.  Perez-Carrillo has been using Ecuadorian Corojo blend on several releases this year for wrapper including the recently released E.P. Carrillo INCH C-99.  The E.P. Carrillo Medalla D’Platino – a shop exclusive for Federal Cigar, and the soon to be released E.P. Carrillo Cabinet Edition are also using this wrapper.

As mentioned, the 5th anniversary cigar will come in one size – a 6 1/2 x 54 vitola.  The company is calling this size a “Double Robusto”.

The E.P. Carrillo 5th Anniversary has a medium brown color wrapper.  Upon closer examination, there is some dark marbling that can be seen. Depending on how the light shines on this wrapper, it could have a reddish / rosado look to it.  This is some oil on the surface of the wrapper.  The wrapper itself has more of a rugged look compared to many E.P. Carrillo cigars, but that also gives the E.P. Carrillo 5th Anniversary its charm.  There are several visible veins and several visible wrapper seams on the wrapper itself. 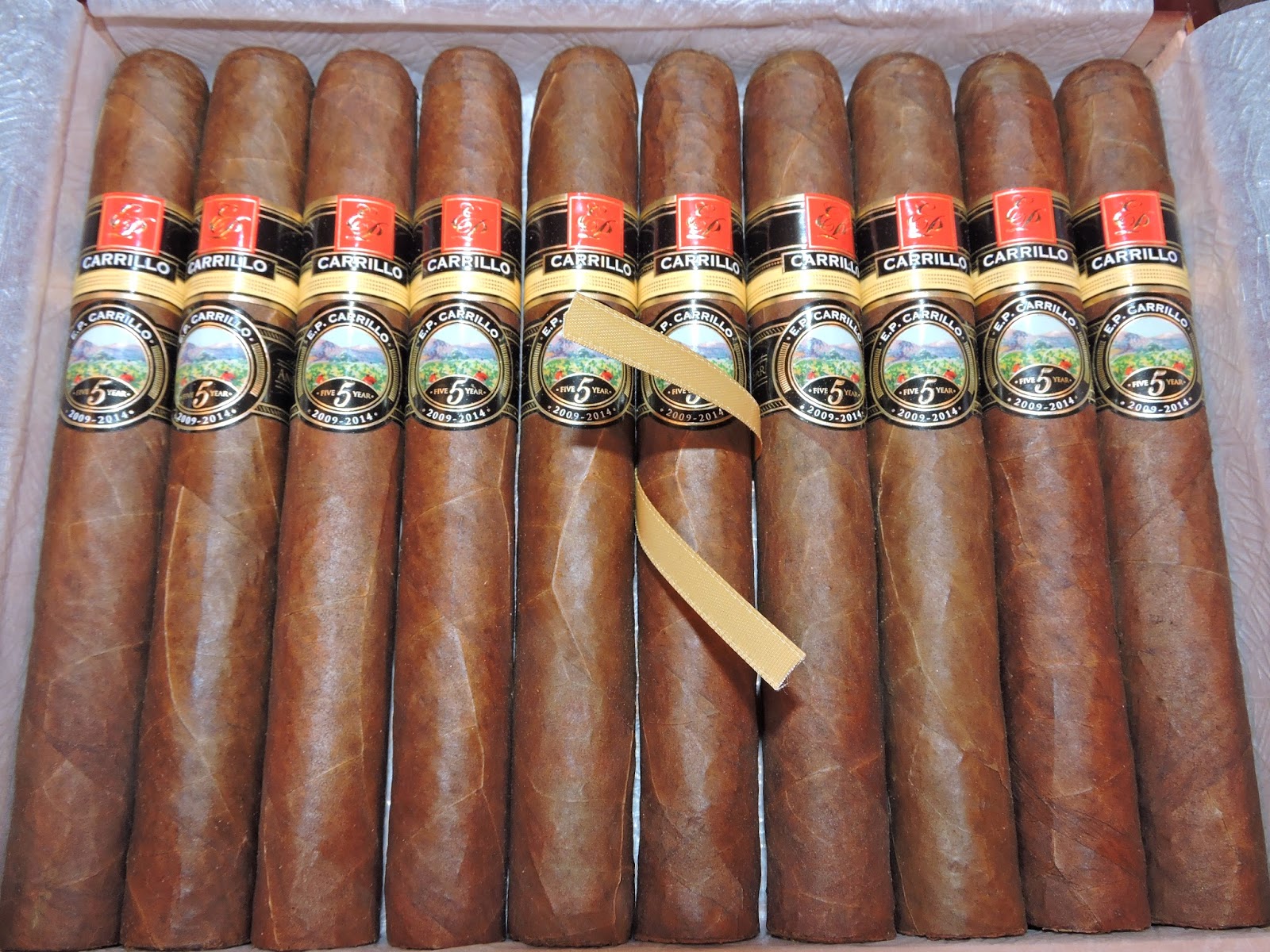 There are two bands on the E.P. Carrillo 5 Year Anniversary.  The primary band is a variation of the band seen on many of the E.P. Carrillo regular production offerings.  It features the red square containing the gold “E.P.” cursive logo.  Tha square rests on a thick black stripe that also contains several rows of gold pin striping and dotted lines. Just under the red stripe is the text “CARRILLO” in white font on a black background.  Below the thick black stripe is a thick yellow stripe.  There are three rows of gold dotted lines sitting on the thick yellow stripe.

While each of the Fall limited releases by E.P. Carrillo contain a secondary band, the 5 Year Anniversary contains a very different one.  There is a circular picture of a tobacco field surrounded by a black ring with gold trim and adornments. The lower part of the picture of the field contains a black wedge like design with the text “FIVE 5 YEARS” in gold font (with the “5” in a larger size).   On the top of the ring is the text “E.P. CARRILLO” in white font.  On the lower part of the ring is the text “2009 – 2014” in white font.  The remainder of the band is black with gold pin striping and adornments.  To the left of the circular picture and sitting on the black field is the text “FIVE YEAR” in gold font.  To the right of the picture is the text “ANNIVERSARY” – also in gold font.

The start to the E.P. Carrillo 5th Anniversary gave me a strong blast of red and black pepper.  At the same time I got some natural tobacco flavors. While these natural tobacco flavors provided some sweetness, at this early stage it was a more traditional sweetness (as opposed to the banana quality I got on the pre-light).  While the pepper settled down on the tongue, I still detected black pepper with a layer of sweetness on the retro-hale.

In the middle of the first third, some coffee notes began to surface.  The coffee notes increased and by the start of the second third, it joined the natural tobacco sweetness in the forefront.  The pepper notes in the background now took on more of a red pepper quality.  It was around this time where notes of cream and oak surfaced in the background.

In the second third, the coffee notes took over a the primary flavor.  There was also a slight increase in the cream notes, but it was still very much a secondary flavor. The natural tobacco sweetness, red pepper, and oak notes remained in the background.

The last third of the E.P. Carrillo 5th Anniversary maintained much of the flavor profile of the previous third.  The difference is that the red pepper notes moved more toward the forefront.  The other difference is I picked up some of the banana-like quality I got on the pre-light draw of this cigar.  This is the way the cigar experience came to a close.  The resulting nub was firm to the touch and cool in temperature.

I found the E.P. Carrillo 5th Anniversary to be very consistent in terms of how it burned.  For the most part, the burn remained straight from start to finish.  There was a slight jaggedness to the burn line, but it did not require much maintenance to keep the burn on track.  The resulting ash was not too firm, but it was not a loose one either.  The ash had a silvery gray color with some dark streaks in it. The burn rate and burn temperature were ideal throughout the smoking experience.

The draw performed very well.  The draw was not too loose, nor too tight.  This cigar did generate quite a bit of smoke along the way making for an enjoyable smoking experience.

From a strength perspective, I found the E.P. Carrillo 5th Anniversary to have no shortage of firepower.  I assessed this cigar as being medium to full strength falling just a little under the threshold for what I would consider full strength.  As for the body, the pepper blast was definitely full-bodied right out of the gate.  The cigar then settled down to medium to full-bodied.  The body did slowly increase along the way and by the last third was back into full-bodied territory.  Overall, I gave a slight edge to body over strength throughout the smoking experience.

Overall I found the E.P. Carrillo 5 Year Anniversary to be a very nice cigar. I liked the flavors it delivered and I liked the fact it was skewed toward the fuller side in terms of strength and body. With the exception of that slight banana note I picked up on the pre-light and toward the end, this cigar is going to deliver a traditional flavor profile with a real “tobacco” taste to it. The other thing I like is while this cigar doesn’t undergo radical flavor transitions, the ones it does undergo are very smooth. Finally, the other interesting thing is the combination of the Sumatra wrapper with the Corojo binder. While this isn’t the first time it’s being done, I took notice of the combination and I was pretty impressed. It did generate plenty of sweetness as I expected – and perhaps that is how that banana note surfaced.