The Espada by Montecristo is the latest line to be introduced to Altadis USA’s Montecristo brand. Over the past three years, Altadis USA has working on making their existing lines more contemporary in terms of their packaging and / or blends.  With the Espada, this is a a definite change of pace for the Montecristo brand.  Not only is this the first Nicaraguan puro to carry the Montecristo name, but this is a Montecristo that is being produced in Nicaragua.  The Espada made its debut just before the 2014 IPCPR Trade Show and was also showcased at the show.  I have recently have had the opportunity to smoke the Espada in the Guard vitola.  I’ve been very impressed with what Altadis USA ha done with the Montecristo brand over the past few years.  While this might be a very different Montecristo in terms of origin and blend, this continues the excellence that has been delivered from this blend.

The name “espada” stands for sword, something that is a part of the famed Montecristo logo. The Espada represents a trend in Nicaraguan puros being developed by the brands of Altadis over the past couple of years. Last year, the company announced the re-launch of its Juan Lopez brand at the 2014 IPCPR. This was followed up by the release of the RyJ by Romeo y Julieta. Both the Juan Lopez and RyJ were Nicaraguan puros.

Without further ado, let’s take a closer look at the Espada by Montecristo and see what this cigar brings to the table.

As mentioned the Espada by Montecristo is a Nicaraguan puro.  It consists of tobaccos from three growing regions of Nicaragua.

The Espada by Montecristo was launched in three sizes.  The cigars are packaged in ten count boxes.

For this cigar experience, I smoked the Guard vitola of the Espada by Montecristo – which is a toro-sized vitola.  The Habano Jalapa wrapper of the Espada Guard has a medium brown color.  There is a light coating of oil on the wrapper. There are some visible veins and some visible wrapper seams.  Overall I found the Espada to have a smooth surface.

There are three bands on the Espada. The primary band is a variation of the standard brown Montecristo band featuring the signature fleur-de-lis in gold.  The brown background has a glossy look to it. A white circle surrounds the fleur-de-lis. The text “MONTECRISTO” is in white font above the white circle. There is gold trim on the outer edge of the band – which also has a circular effect around the front of the band.  There are four gold pinstripes moving outward to the left and right with the middle pinstripes having a “wave” like effect.  The band has an a simulated “extension” on the lower portion of the band – which almost looks like a secondary band.  This “extension” also has a glossy brown color.  On the extension is the text . “ESPADA” in gold cursive font. To the left and right is the text “MONTECRISTO” in red font.

The second band starts around the 1/2 way point and goes 2/3 to the footer. The band has the appearance of a two attached adhesive stamps (in fact there is some light adhesion on the back – although it is not attached to the wrapper). The top stamp is dull brown with a dark watermark. Sitting on the background are two gold crossed swords representing the Espada logo. Below the swords are the text “Espada” in gold costive font with “MONTECRISTO in pale red font. The bottom stamp has a “certificate” like look signed by Grupos de Maestros.

The third band is glossy brown with the text “Espada” in gold cursive font. There is gold trim across the top and bottom.  To the left and right is the text “MONTECRISTO” in red font.

A note of the packaging.  The packaging combines classic and contemporary elements.  The box is a contemporary styled suede box with a classic logo Montecristo Espada branding. 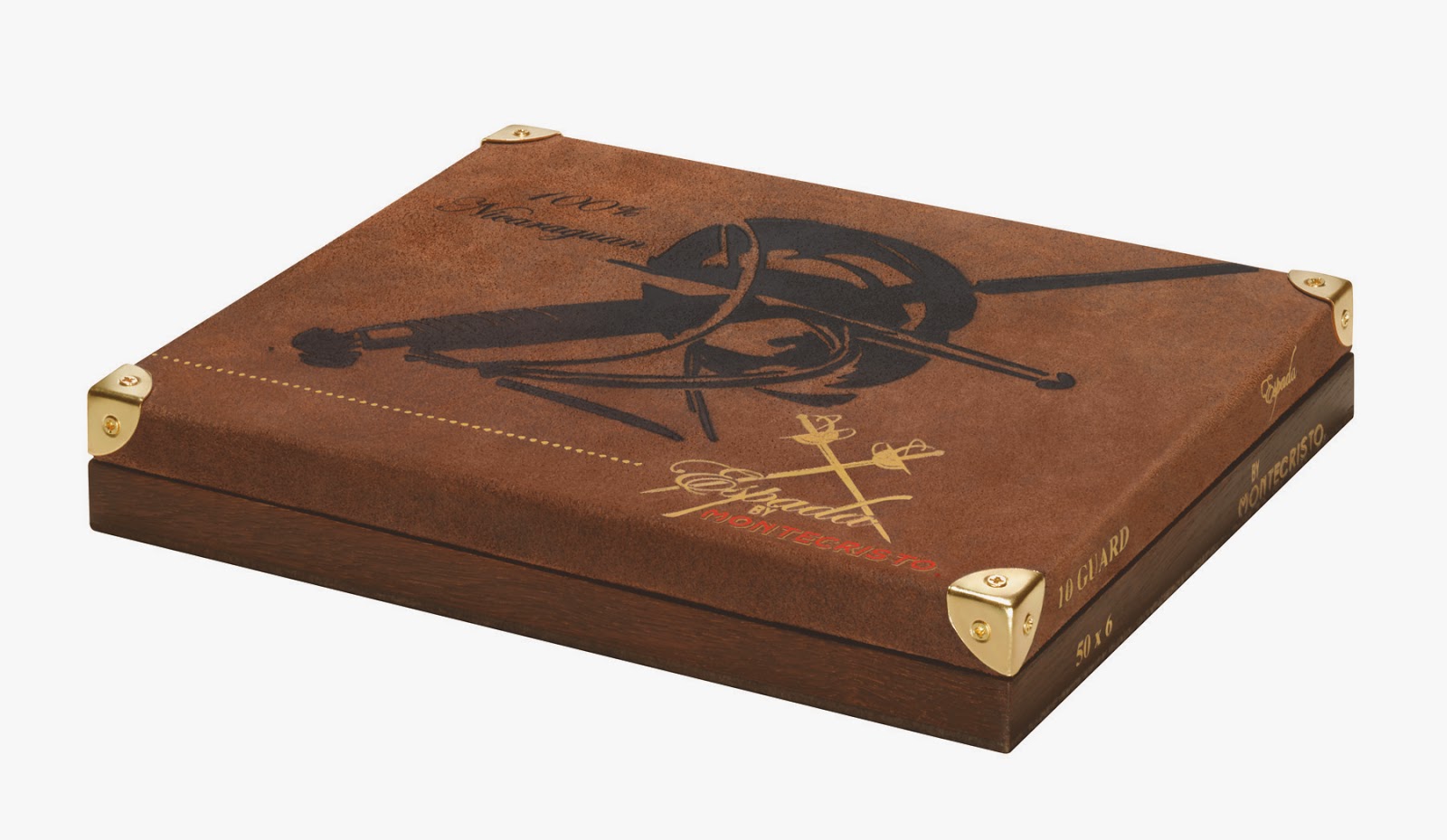 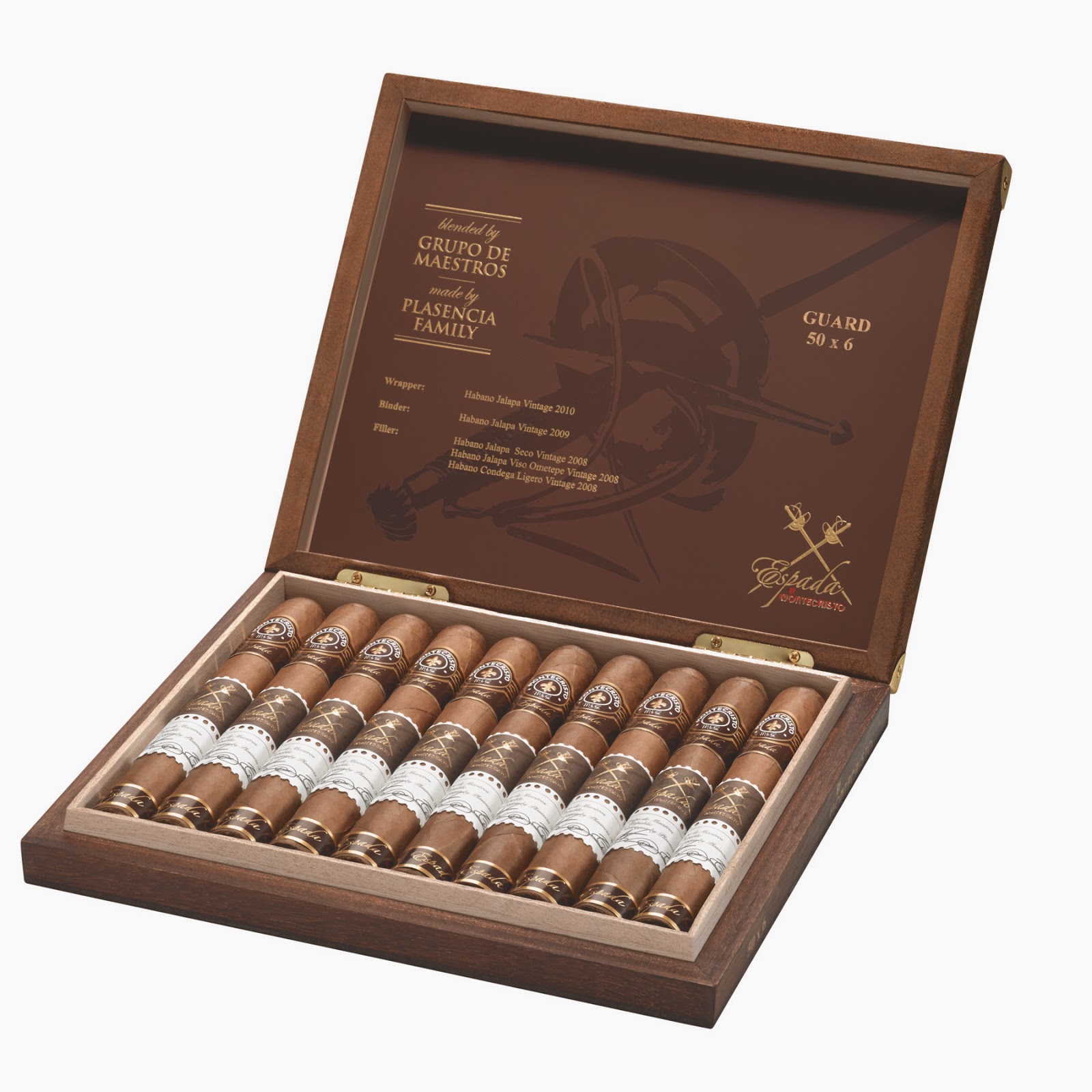 I went with my usual choice of a straight cut to remove the cap of the Espada Guard. Once the cap was clipped, I moved on to the pre-light draw. The dry draw gave me notes of earth, sweet natural tobacco, and some floral spice. Overall I was pleased with the pre-light draw of the Espada. At this point, I removed both the footer band and the stamp-styled middle band, lit up my cigar and then awaited what the smoking phase would have in store.

The start to the Espada provided notes of sweet natural tobacco, citrus, and pepper. The pepper had a slight jalapeno note on the tongue, but it had more of a white pepper feel on the retro-hale. The fusion of the citrus and pepper provided a slight twang on the palate.

In the last third, the pepper increased a little more, but the coffee and natural tobacco notes still held their position in the forefront. I found most of the citrus and twang to have dissipated.  This is the way the flavor profile held until the end. The resulting nub was outstanding – firm to the touch and cool in temperature.

I found the Espada to be a well constructed cigar and this was reflected nicely with the burn and draw. The burn remained relatively straight from start to finish – requiring occasional touch-ups along the way.  The ash was on the firmer side and had a salt and pepper color to it. The ash came off the Espada in nice clean chunks. The burn rate and burn temperature were ideal.

The draw was solid.  It was not too loose nor not too tight.  This was a low maintenance draw to work  and made this cigar an enjoyable cigar from start to finish.

Of all of the brands Altadis has expanded over the past few years, I have found the Montecristo brand to be the most consistent.  Cigars such as the Monte, Montecristo Epic Vintage 2007 (the Cigar Coop #11 Cigar for 2012), and Montecristo New York Connoisseur Edition (the Cigar Coop #2 Cigar for 2012) have scored very well.  When the Espada was first released, I will admit I was a little underwhelmed and thought it needed some more time.  About 10 weeks of aging really did the trick with this one and now I’m ready to include the Espada on that list of excellent Montecristo releases.  Like most of the Montecristos, the Espada isn’t going to deliver revolutionary flavor, but it will deliver excellent flavor.  Montecristo is a more premium brand with Altadis and the Espada falls around the $12.00 price point, so that is something to consider if one is interested in this cigar.   I probably would recommend this cigar for a more experienced cigar enthusiast.  As for myself, this is a cigar I would smoke again – and it’s worthy of a box split.