Assessment Updates will be posted on this web-site to: 1) Assess “pre-review” cigars that were not given a rating or score (typically pre-release cigars); 2) Provide numeric ratings to cigars previously assessed prior to the implementation of the numeric scoring system; 3) Provide a re-assessment and re-score of previously assessed/score cigars. Today, we provide an assessment rating and score to the AKA Hybrid in the RPM size. This was a cigar we originally assessed back in January, 2014 in the DNA Vitola. 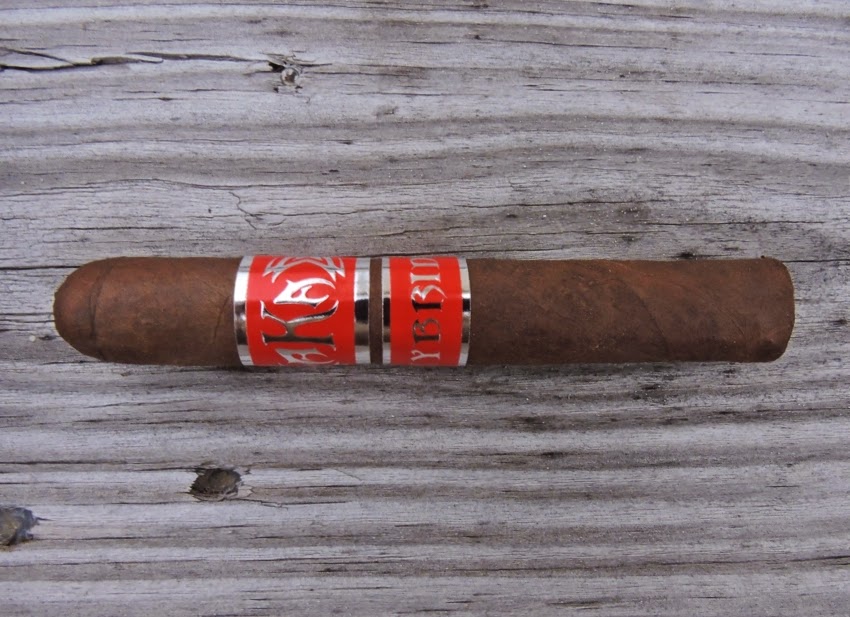 The AKA Hybrid is the first blend released by Texas-based cigar manufacturer AKA Cigars. AKA Cigars stands for “American Kick Ass” Cigars. The company is run by Jay Lundy and Tom Poehler. Back in 2010, the company connected with Christian Eiroa who started working with them the Hybrid blend.

With the AKA Hybrid, the story around this cigar is definitely its unique hybrid-seed wrapper (thus where it gets its name). The AKA web-site tells the story of the Hybrid Seed wrapper:

We worked non-stop for about a year and a half on the Hybrid Blend. The Hybrid Blend took so long to develop because we wanted to create something Special and Unlike any other cigar on the market. The Hybrid is rolled at the Camacho/Davidoff factory in Danli Honduras. We are fortunate to be very good friends with Christian Eiroa and have know him for 15 years. Christian worked side by side with us on most all of our 8 trips to the factory in a year and a half span. It was on our trip back in September 2010 that Christian offered to let us use a Very Special 5 Year Aged Wrapper that his father “Don Julio Eiroa” had spent several years creating. This Special Hybrid Wrapper comes from the Cross-Breeding of Cameroon and 59 Cuban Seed Corojo Seeds. The Hybrid Wrapper is a “True Hybrid” , a “One Of A Kind” and is only grown for and used by AKA.

This time around, we take a look at the AKA Hybrid in the RPM.  This is a 4 1/2 x 42 petit corona that comes in 24 count boxes.  RPM stands for Rapid Perception Multiplier.  All of the vitola names in the AKA Hybrid line are acronym names related to sensory perception.

When we first looked at the AKA Hybrid we smoked the 5 1/2 x 50 robusto-sized DNA (Dynamic Nuero Accelerator).  The RPM has some common elements to the DNA.  I found the RPM has the cherry, natural tobacco, pepper, and bready notes of the DNA.  I found the cherry sweetness on the RPM was less “syrupy” when compared to the DNA.  With the RPM, the bready notes earlier while the pepper notes surfaced much later.  The RPM did not have the creamy notes that I got on the DNA.

Like the DNA, the RPM still delivered a medium to full cigar in terms of strength and body.  The RPM had an excellent burn and draw.  Overall while the RPM has a little less complexity, the flavors seemed a little more balanced.  This is an excellent cigar and one worth a box split.