Cigar Review: The King is Dead – The Last Payday by Caldwell Cigar Company

The King is Dead is a part of three lines made by Caldwell Cigar Company under its Caldwell Collection brand. Caldwell Cigar Company is owned by Robert Caldwell. Caldwell was best known as a partner of Christian Eiroa with Wynwood Cigars. Last September, it was announced that the partnership with Caldwell and Eiroa had dissolved. Following his departure from Wynwood Cigars, Caldwell set his sights on the Dominican Republic where he has teamed up with William and Henderson Ventura at Tabacalera Ventura to make blends for his new company. One big differentiator in the Caldwell Collection is that it uses rare / hard to find tobaccos.  The King is Dead demonstrates this philosophy by incorporating a wrapper not typically used on many premium handmade cigars called Negrito. Recently, I’ve had an opportunity to smoke the King is Dead in a torpedo-shaped vitola called “The Last Payday”.  Not only did I find this to be another outstanding blend in the Caldwell Collection, but I found this torpedo to be the best vitola in the King is Dead line.

According to Caldwell Cigar Company, the reason why the Negrito wrapper is not found on many cigars is because it is a wrapper that just doesn’t play well with other tobaccos.  However, the team at Tabacalera Ventura was able to figure a way to make the right matches with other tobaccos and thus the King is Dead blend came to life.

In addition to the King is Dead there are two other lines in the Caldwell Collection – Eastern Standard (featuring a unique Ecuadorian Connecicut hybrid wrapper known as “Dark Connecticut”) and Long Live the King (a Corojo blend). The Caldwell Collection features rare tobaccos rated “Grade A” and thus is a more premium offering. Caldwell also released a more value priced line called Junior Varsity to address that segment of the market.

Without further ado, let’s take a closer look at the King is Dead and see what this cigar brings to the table.

The Negrito wrapper for the King is Dead is sourced from the Dominican Republic.  In addition, there is also Dominican Negrito tobacco in the filler.  The blend also incorporates Dominican Corojo for the binder as well as in the filler.  Finally, there also is HVA (Habana Vuelta Abaja) in the filler.

The Negrito wrapper of the King is Dead Last Payday has a medium brown wrapper that seems almost a shade lighter than being milk chocolate in cover.  The wrapper has a decent amount of oil on the surface.  There are some visible thin veins and there are also some visible wrapper seams. The torpedo tip has a sharp tapering from the base of the cigar.

The band to the King is Dead has a pale yellow color to it with a tan colored trim. On the center of the band is a design of a gold throne split into two halves. To the left side of the throne is the text “THE KING” in thin black font. To the right side of the throne is the text” IS DEAD” – also in thin black font. There are gold adornments to the far left and far right – including a crown-like design to the far right.

The King is Dead Last Payday began with a short blast of spice that was a mix of cedar sweet-spice and red pepper.  As the spice subsided, notes of milk chocolate, cream and natural tobacco emerged.  The chocolate notes and cream became primary notes while the pepper, cedar, and natural tobacco notes became secondary.  On the retro-hale, there was also a combination of the pepper and cedar sweet-spice.

Throughout the second half, the cedar notes were primary. The chocolate and cream occasionally still made their way back into the forefront. This continued right into the last third. At this point, the natural tobacco and pepper notes played a less significant role. This is the way the flavor profile remained until the end.  The resulting nub was firm to the touch and cool in temperature.

Like I have seen with across the other cigars from Caldwell Cigars, I have personally found these to be very well constructed cigars and they score nicely in the area of burn and draw. For the most part the burn line remained straight from start to finish. There was a slight amount of curvature along the way, but this was a burn that was not in danger of getting off track.  The resulting ash was charcoal gray with some darker spots. The ash itself came off the cigar in nice clean chunks. The burn rate and burn temperature were ideal. 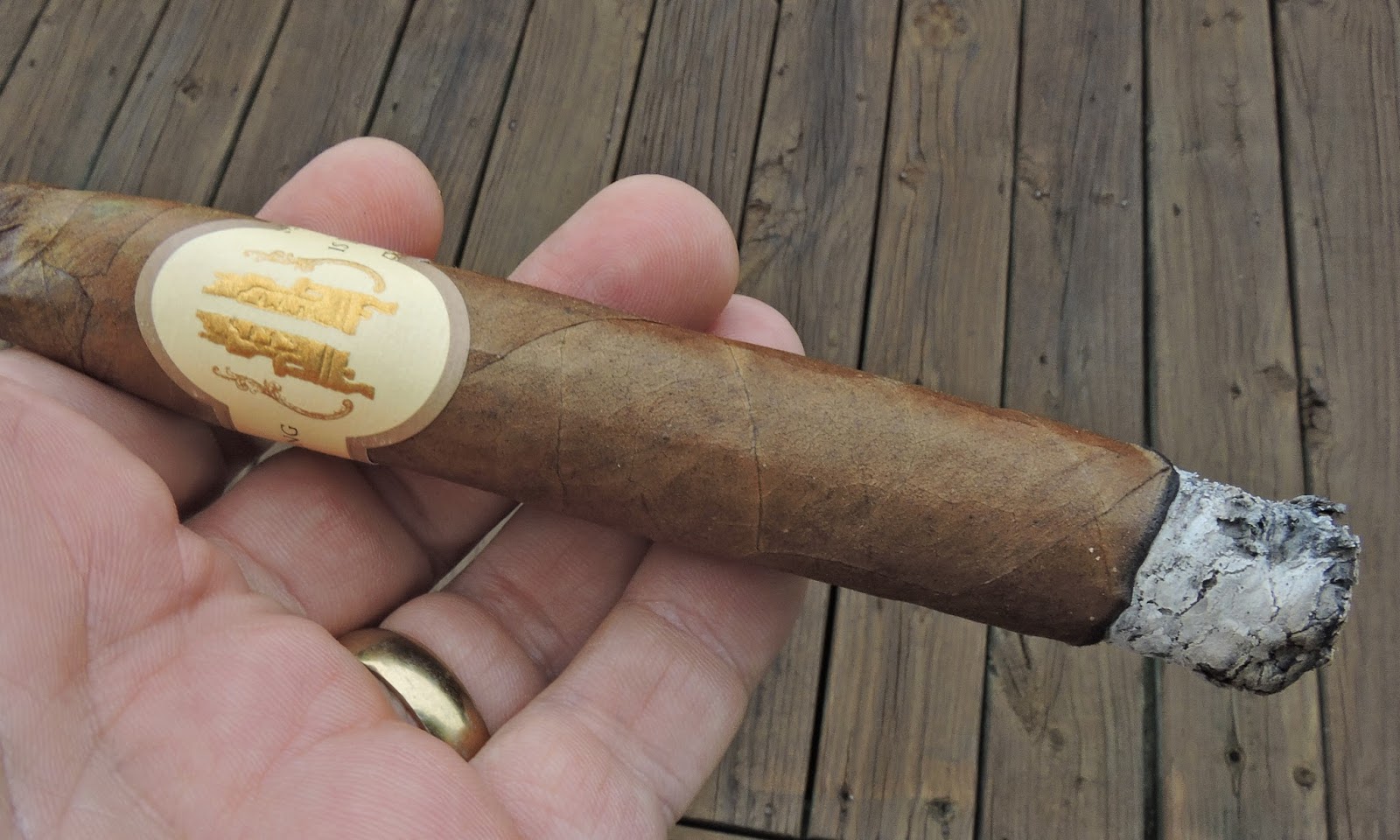 The draw performed well. For a torpedo, I was impressed how this cigar drew from start to finish. The King is Dead was not too loose not too tight. Despite the sharp taper of this torpedo tip, the cigar did not get soft as the cigar experience progressed.

Normally when it comes to torpedo vitolas, I would not consider this to be a go to size of mine. However 2014 seems to have produced some very good ones. In terms of this specific line, the torpedo-sized Last Payday seems to be the blend that worked the best here. I felt it delivered the best flavors and had a nice amount of smoothness. The King is Dead is consistent with with the other cigars of the Caldwell Collection in that “it brings something different to the table” – and this is something I like in a cigar. The King is Dead is not only a cigar that I would give to a new or experienced cigar enthusiast, but it would be something I would make a box purchase of.