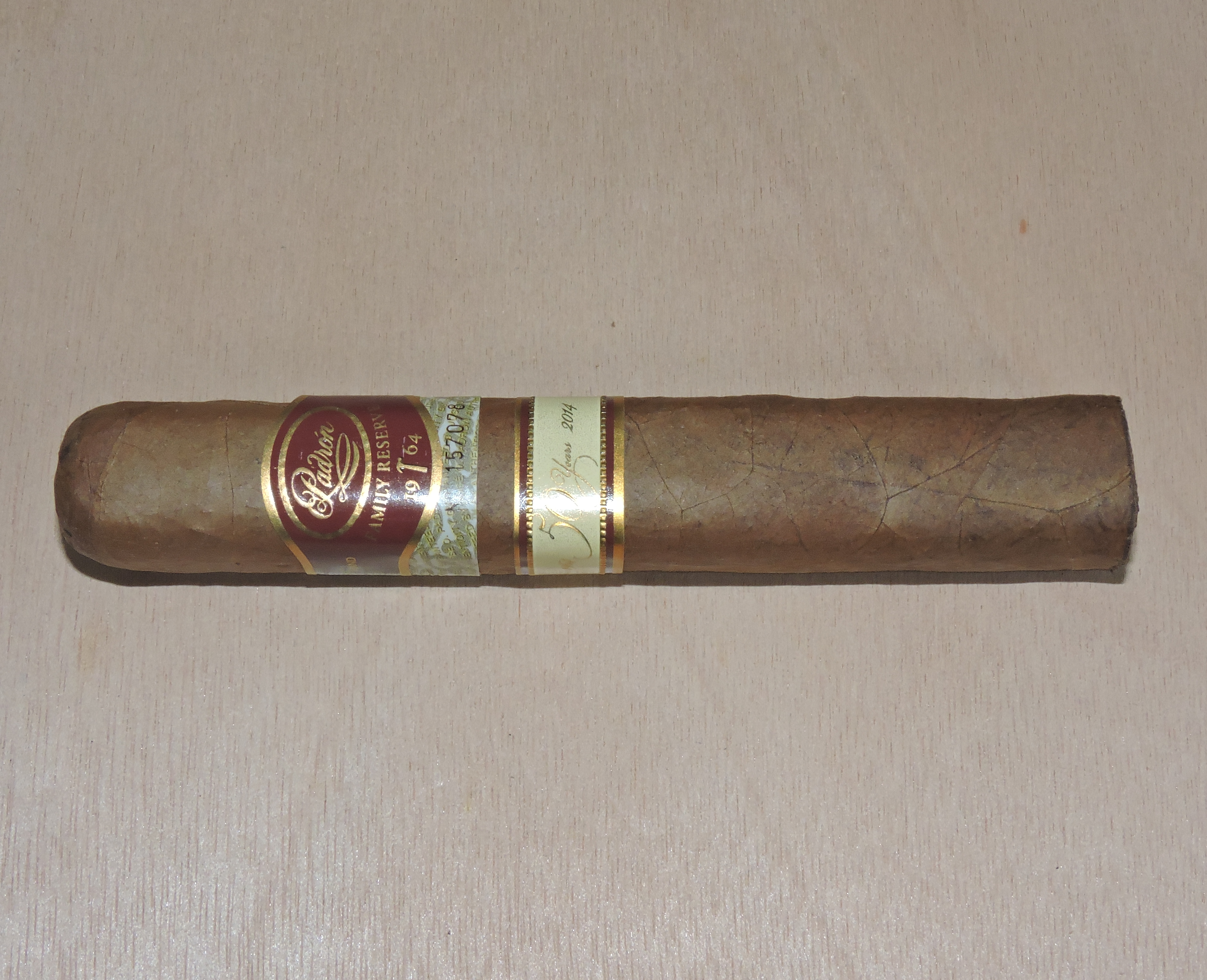 Without further ado, let’s take a closer look at the Padron Family Reserve No. 50 Natural and see what this cigar brings to the table.

The Padron Family Reserve No. 50 Natural has a caramel color wrapper. Upon closer examination there is some darker marbling. The wrapper itself has a smooth texture. There is a light coating of oil on the surface. There are minimal veins and thin wrapper seams the are visible. The box-press itself is somewhat of a softer box-press with slight rounding. The box-press is well packed with no soft spots.

The second band has a white background. It rests just under the first band and serves as a band of authenticity for the Padron cigars – which are often subject to counterfeiting. It features the scripted Padron logo in gray and the text “AUTHENTICITY GUARANTEED BY JOSE O PADRÓN” in a gold(ish) font. Each Padron Family Reserve cigar has a unique serial number located on that second band in black font. My serial number was 157078.

Located below the first two bands is a third band. That third band is ivory with gold with maroon trim. It features the text “50 Years” in gold cursive font. Flanking that text to the left and right is 1964 and 2014 respectively – both in small gold font. On the far left and far rightside is also the text “Celebrating” with a “50” overlaying it – both in a light gold font.

Before lighting up the Padron Family Reserve No. 50 Natural, I started with a straight cut to remove the cap. After the clipping the cap, it was time for the pre-light draw ritual. The cold draw delivered notes of wood, natural tobacco, and a slight cherry note. There wasn’t much in the way of spice I got on the pre-light draw. Overall, I considered this to be a satisfactory pre-light draw. I was now ready to light up the Padron Family Reserve No. 50 Natural and see what the smoking phase had in store.

The start to the Padron Family Reserve No. 50 Natural provided notes of black pepper, natural tobacco, and an interesting sweetness that was a cross between honey and cherry notes. During the early stages none of these flavors became the dominant flavor on the tongue. Meanwhile the black pepper could also be detected on the retro-hale with some herbal notes mixed into the equation.

Later in the first third, I found the natural tobacco sweetness to be primary. There was a slight “twang” in the forefront between the pepper and the sweetness. Meanwhile the black pepper notes were secondary.

In the second third, I found the sweetness change into more of a cedar note. The “twang” note diminished. The primary flavors became more cedar as the natural tobacco notes joined the pepper notes in the background. As the Padron Family Reserve No. 50 Natural moved into the final third, the cedar remained the dominant flavor, but was more skewed toward the spicier side. This is the way the cigar experience came to an end. The resulting nub was firm to the touch and cool in temperature.

The construction of the Family Reserve No. 50 Natural was what I expected from Padron – outstanding. The burn and draw reflected this excellent construction. There was a subtle curvature to the burn line, but overall it remained straight from start to finish. The resulting ash had a salt and pepper color to it. The ash was firm and came off the cigar in nice clean chunks – with virtually no flaking along the way. The burn temperature was ideal. I found the No. 50 Natural to burn a little slow, but this didn’t seem to have any adverse effects flavor or burn-wise.

The draw performed excellent as well.  I like a box-press that has a nice firm pack with a little resistance.  The Padron Family Reserve No. 50 Natural falls right into this zone.

With the Padron Family Reserve No. 50 Natural, this is not going to be a cigar that is a nicotine bomb, nor a cigar where the flavors were very heavy on the palate.  Overall, I had this cigar as a medium strength, medium-bodied smoke.  While there was a slight increase in strength and body toward the end, I found both the strength and body still remained in the medium area of the spectrum for both attributes.  Both the strength and body did balance each other very nicely with neither attribute overshadowing the other.

In the introduction, I mentioned the Padron Family Reserve No. 50 Natural is a quality release that delivers an excellent smoking experience.  This is a cigar that scores well in terms of flavor, construction, and complexity.  The problem is that it is up against some very good competition within its own brand and I’d probably reach for some other Family Reserve releases first.  While not a young cigar, I do think there is some aging potential with this cigar to smoke even better.  My experience is that age has been kind to cigars like the Family Reserve No. 46 and Family Reserve No. 85 cigars, and my gut tells me the No. 50 Natural could fall into this category.  Therefore I’m content to say this is a cigar that smokes well now,  and has all of the potential to smoke better down the road.

The Padron Family Reserve No. 50 Natural is a cigar that carries a $25.00 price point.  While that is not factored into our numerical score, it does play a role in our assessment rating.  This is a cigar I’d position to a novice or experienced cigar enthusiast.  As for myself, this one is worth a fiver.