For the Make of Texas. Cigar, the four collectible boxes – each with a theme to reflect the contemporary urban culture of Texas.

Without further ado, let’s take a closer look at the Zino Platinum Make of Texas Collector’s Edition and see what this cigar brings to the table.

Blend Profile
The same blend of the Zino Platinum Make of Texas Collector’s Edition is included in each of the packaging options.
Wrapper: EcuadorianBinder: DominicanFiller: DominicanVitolas Available 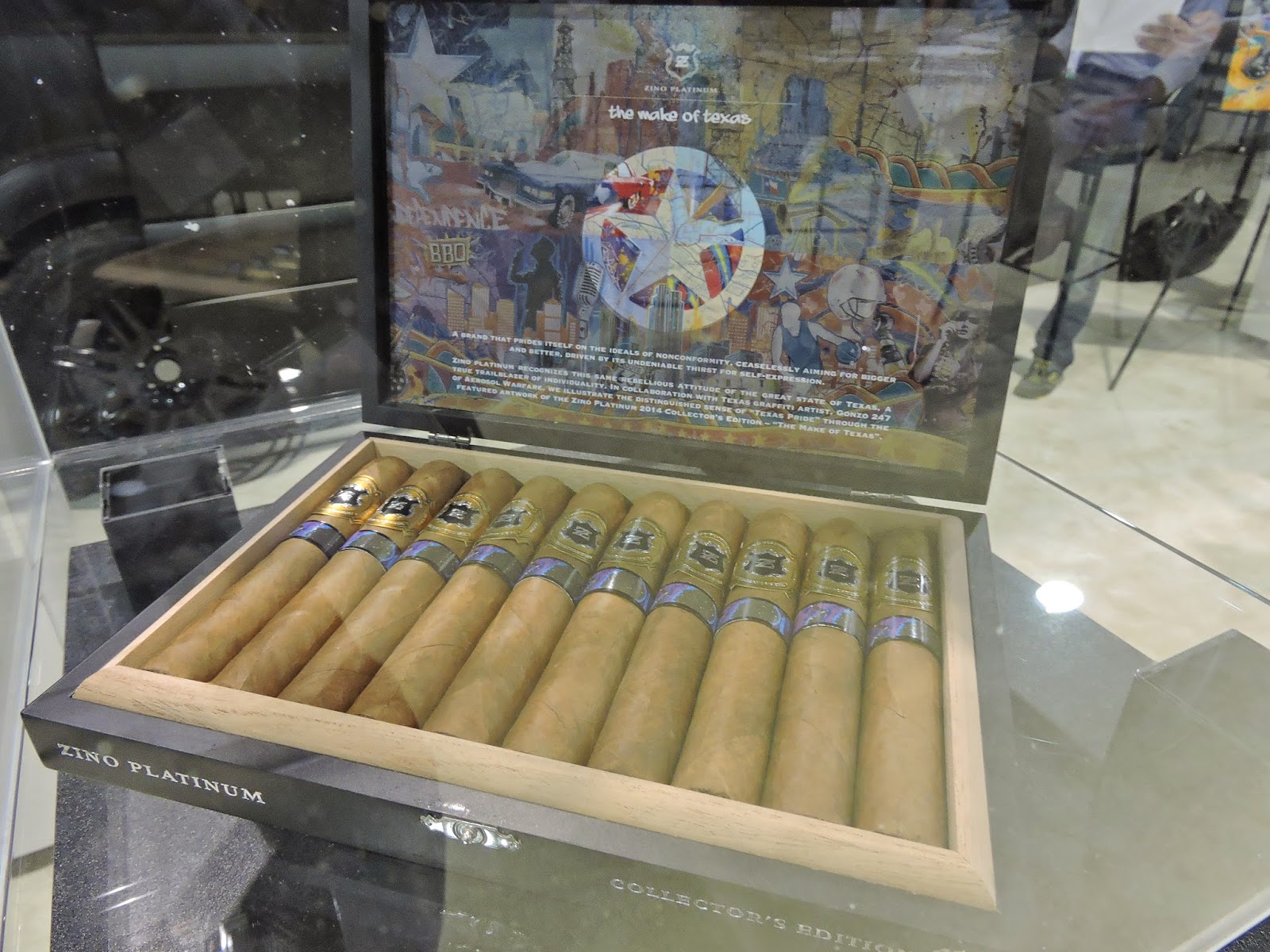 While Zino has never disclosed whether the wrappers are the same across the three “Make of” releases, they do seem to be in the same wheelhouse color-wise.  The Make of Texas has that medium brown, almost butterscotch color that the Make of New York and Make of LA cigars have. The wrapper seams are well hidden, but there are some visible veins.  While there is a light coat of oil on the wrapper, but the there also is a slightly rugged feel to the Ecuadorian wrapper to the Make of Texas.

The primary band is common to all four packaging options of the Make of Texas series. The primary band features a black, crystal, and yellow color scheme. There is a crystal Zino Platinum “Z” prominently in the center of a black shield. The shield has a crystal trim around it. The shield sits on a gold background with black design trim around it. Going clockwise (from the top) around the front of the band in a circular fashion is the text (in crystal font): “Zino Platinum”, “MADE” “COLLECTORS EDITION” “HAND”. To the right of the gold field is a crystal-colored “2014”.

The secondary band coincides with the art work on the packaging option.  For this Zino, it features a blue-colored mosaic highlighted by a sheriff’s badge and an oil derrick.

Prior to lighting up the Make of Texas, I went with with a straight cut to remove the cap of the cigar. Once the cap was successfully clipped, I moved on to the pre-light draw. The dry draw provided notes of sweet natural tobacco, some black pepper, and a touch of floral. Overall I considered this pre-light draw to be satisfactory. At this point I was ready to light up my Zino Platinum Make of Texas and see what the smoking phase would have in store.

The start to the Zino Platinum Make of Texas provided a mix of black pepper and sweet natural tobacco.  There was also a slight musty component present as more of a secondary note.  The musty note was not overpowering and it actually worked quite well here.  The black pepper and natural tobacco notes quickly fused together very early on.  I also picked up some grass notes in the background.  Meanwhile the black pepper was prominent on the retro-hale.

During the first third, the natural tobacco notes took over.  The pepper notes were a close secondary flavor.  Meanwhile the grass and musty notes were more distant.  I also detected some cream notes in the background.

During the second third, the pepper became a little more prominent and re-joined the natural tobacco notes in the forefront.  The grass notes were still present in the background.  The cream and musty notes were diminishing.

The last third saw the grass notes join the pepper in the forefront.  The natural tobacco sweetness now was diminished.  There was still a slight musty quality, but now the cream notes were pretty much dissipated.  This is the way the smoking experience to the Make of Texas ended.  The resulting nub was firm to the touch and cool in temperature.

Overall I found the Make of Texas to be a well constructed cigar and this was reflected on both the burn and draw of the cigar.  Overall I found this to be a low maintenance burn.  The burn line remained relatively straight from start to finish requiring little in the way of touch-ups.  The resulting ash was white in color.  It wasn’t an overly tight ash, but it wasn’t a loose one either.  There was a slight amount of flaking, but nothing out of the norm.  The burn rate and burn temperature were ideal.

The draw was excellent.  It had a touch of resistance – something I feel was perfect for this cigar.  I found this worked perfect on this 56 ring gauge cigar.

When I assessed the Zino Platinum Make of LA, I was a little surprised by the level of strength and body in that cigar. In terms of the Make of Texas, this is also going to be a fuller and stronger cigar when compared to many Davidoff offerings, but it will be slightly dialed back from the LA cigar. The strength and body both operate at a medium to full level – falling just shy of full in both categories. In terms of strength versus body, I did find the Texas might have a fractional edge when it comes to strength, but not all that much.

There is no doubt that Davidoff has made a strong commitment to artists. The concept of commissioning artists to design packaging has been recently seen in the Davidoff Art Edition 2014. However the concept has already been a part of the Zino line for quite a while – going back to the Zino Platinum Ten series. I have especially liked the concept when it comes to the “Make of” releases. I love the idea of a urban contemporary art theme with a cigar release. However, the most important thing has been that the cigars have been very good. I still rank the Zino Make of LA as the best of the “Make of” cigars, but the Make of Texas is very good and probably ranks #2. It might be a little too strong a cigar for a novice, but I’d certainly recommend this to an experienced cigar enthusiast. Someone looking for Davidoff-esque qualities with a little more strength will enjoy that. As for myself, this is a cigar I’d some again – and its worth a fiver.