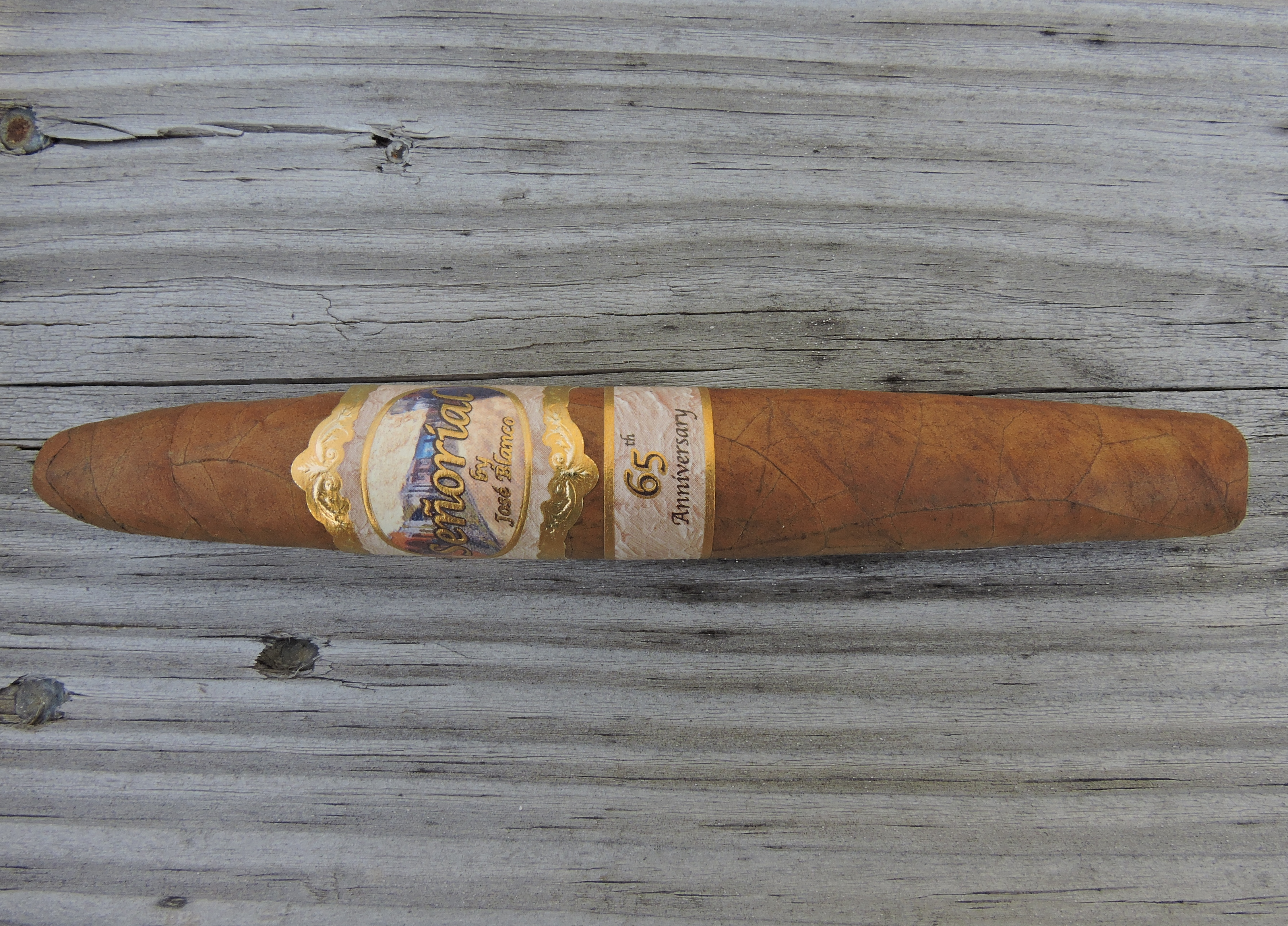 The 65th Anniversary derives its name because Blanco recently just celebrated his 65th birthday. In fact the announcement of the Senorial 65th Anniversary Perfecto Elegance was made on Blanco’s birthday (10/27/14). In terms of the cigar itself, once again Blanco teams up with his cousin Jochi Blanco leveraging the tobaccos and factory at Tabacalera La Palma to make this cigar.

Without further ado, let’s take a closer look at the Senorial 65th Anniversary Perfecto Elegance and see what this cigar brings to the table.

As mentioned above, the Senorial 65th Anniversary Perfecto Elegance is an all Dominican cigar. When the cigar was announced, Blanco provided some context on this cigar:

“This is a cigar very special to me, and I wish to share more than the usual by also mentioning these beautiful Dominican farms, as well as primings depending on the seeds. Depending on the farm and seed, I carefully chose each priming and I am only using tobaccos with 5 to 6 years of age for this edition. It all wraps up in a medium to full bodied cigar, full flavored with great complexity and a quality smoothness. It is hence very balanced and in harmony.”

As mentioned the blend is a Dominican puro with tobaccos from three farms.

The Senorial 65th Anniversary Perfecto Elegance is available in one size a 5 3/4 x 55.  The cigars come in ten count boxes and a total of 20,000 cigars have been produced. 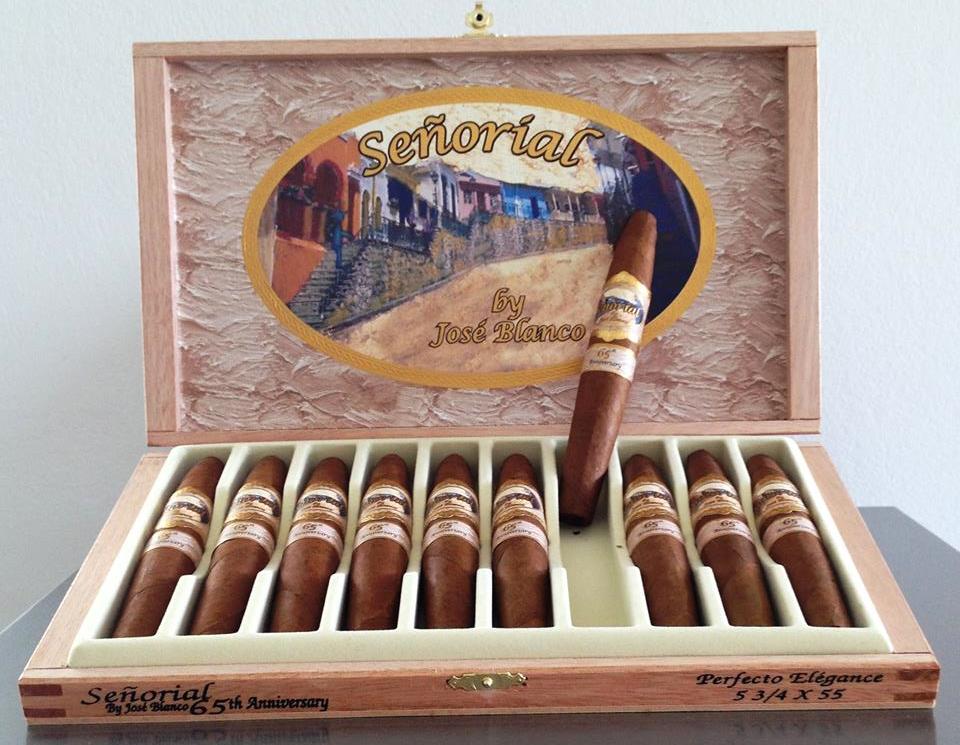 The Senorial 65th Anniversary Perfecto Elegance has a light cinnamon colored wrapper.  Upon closer examination there is some darker marbling on the surface of the wrapper.  The wrapper is on the smoother side.  There is some oil on the surface.  While there are some visible veins, many of the wrapper seams are well-hidden.  The perfecto has an open footer with a slight taper heading toward it.  The tapering toward the cap is stepper.

There are two bands on the Senorial 65th Anniversary Perfecto Elegance.  The primary band is a slight variation of the band found on the regular production Senorial. The band features desert sandy colored mountain-like design (as opposed to a multi-colored design on the regular production Senorial) . The middle of the band has a curved orthogonal shape to it with gold trim.  In the middle of that shape is an portrait of a village – also with an oil painting effect.  The village design is surrounded by a gold-grimed oval.  Across the picture of the village is the text “Senorial by Jose Blanco” – in gold font.  To the left of the orthogonal portion of the band is the text “Hand Made” in brown “hand painted style” font while on the right side is the text “Dominican Republic” – also in the same brown font.  The outer edges of the band have gold trim.

The secondary band rests below the primary band.  It also features a sandy-colored mountain design with gold trim.  Sitting on that design is the text “65th Anniversary” in brown font.

Prior to lighting up my Senorial 65th Anniversary Perfecto Elegance, I went with my usual choice of a straight cut to remove the cap.  Once the cap was clipped I moved on to the pre-light draw phase.  The dry draw provided some notes of sweet natural tobacco, wood, and a slight tingly pepper note.  Overall I considered the pre-light draw of the Senorial 65th Anniversary to be satisfactory.  At this point I was ready to light up this cigar and await what the smoking phase would have in store.

The start to the Senorial 65th Anniversary delivered a mix of spices that included baker’s spice and black pepper.  I also detected some earth notes right out of the gate,  Meanwhile there was an interesting plum-like sweetness I detected in the background.  The retro-hale provided some more notes of black pepper.

As the Senorial 65th Anniversary moved through the first third, the plum sweetness went primary. The earth notes had morphed into more of a grain-like flavor and moved into the forefront.  Meanwhile the baker’s spice and pepper had receded to secondary notes.

During the second third, the grain notes remained in the forefront and were also joined by a cinnamon-like flavor.  The plum notes diminished and joined the pepper in the background. I found these background notes really complemented the grain and cinnamon notes nicely.  I also detected some bakers spice and cinnamon on the retro-hale.

On the last third, there was definitely a spicy kick.  I found the black pepper became prominent. The grain, cinnamon, and plum notes were now playing less of a role.  These additional notes balanced the spice nicely and prevented it from becoming too overwhelming.  The resulting nub was cool in temperature, but slightly soft to the touch.

Blanco told me that he picked the best rollers with the most experience to roll this perfecto – and this certainly was reflected in the Senorial 65th Anniversary’s outstanding construction.   This no doubt contributed to a nice score when it came to burn and draw with this cigar.

Oveall I found the Senorial 65th Anniversary to burn relatively straight from start to finish.  The cigar did require some touch-ups along the way, but I did not consider the amount of touch-ups to be above the norm.  The resulting ash was on the firm side with a salt and pepper color.  The burn rate and burn temperature were ideal.

As for the draw, I found the Senorial 65th Anniversary to perform quite well.  It was not too loose, nor was it too tight.  The cigar itself produced an ample amount of smoke throughout the smoking experience.

From both a strength and body perspective, I found the Senorial 65th Anniversary to be a cigar where both attributes build up to the fuller side as the smoking experience progresses. The strength started out in the medium range, and it increased in a linear fashion throughout the smoking experience. It became medium to full in the second third and finally full strength in the last third. This gradual increase definitely caused the strength to sneak up on me

The flavors started out medium to full-bodied.  These notes increased as well. By the last third, the Senorial 65th Anniversary was performing as a full-bodied smoke. In terms of strength versus body, I gave a slight edge to the body in the first half, but the second half saw an equilibrium between the two attributes.

While some of the grainy notes reminded me of the regular production Senorial, overall I found the Senorial 65th Anniversary to very much have its own character delivering some very interesting flavors. I found this cigar to have a nice amount of complexity to keep me very interested from start to finish.  I also was very impressed with this blend in the perfecto format.  Many times I will comment about perfectos saying “I wish this blend was in a parejo”, but no such comments from me with the Senorial 65th Anniversary.  This was also a cigar that was ready to smoke and exhibited no youngness, but I am curious to see the effects of longer time aging on this blend.

This is probably a cigar I would steer more toward an experienced cigar enthusiast because it does get fuller and stronger in the second half.  As for myself, this is definitely a box-worthy cigar – and one I would easily smoke again.