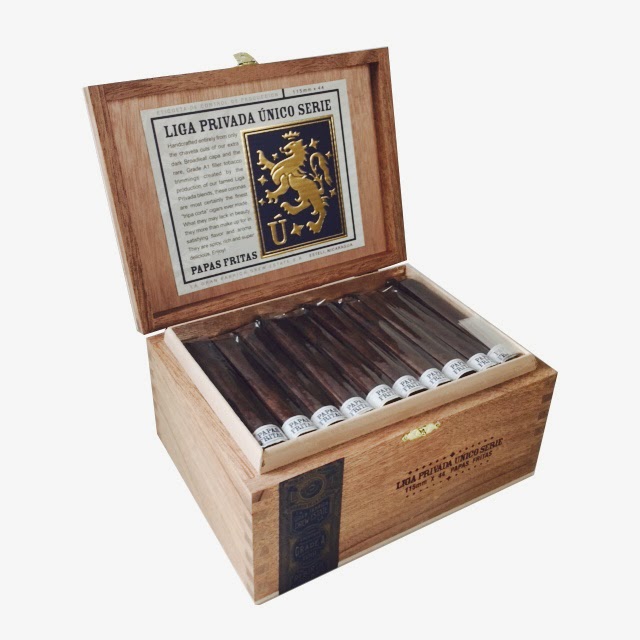 Drew Estate Tobacco Company has announced its Liga Privada  Unico Serie Papas Fritas will now be offered in new 50 count boxes.  The news boxes will replace the 4 count tin / 28 count boxes that the Papas Fritas line has been offered on.  The new packaging has resulted in a price decrease from $6.40 SRP per cigar to $5.25 SRP per cigar.

Papas Fritas was released in late 2012.  It is 4 1/2 x 44 corona-size cigar is a tripa corta (that means short-fill) smoke that is comprised of trimmings from the other Liga Privada cigars being made. As a part of the Unico Serie, it follows the “one size, one blend” featuring a Connecticut Broadleaf Maduro wrapper, Brazilian Mata Fina Binder, and a combination of Nicaraguan and Honduran filler.

In a press release announcing the change, Drew Estate President Michael Cellucci stated that, “Papas Fritas has been a good choice for any Liga Privada fan looking for a short smoke. We needed something for fans of Papas Fritas who already had plenty of tins and wanted a better value, so now we’re offering the cigar with no tin. The tins will now become a collector’s item and the Papas Fritas will be a little more budget friendly. It’s a win-win.”

Plans are for the new packaging to ship to Drew Diplomat Retailer Program accounts nationwide beginning in the next few week – who get get priority on new releases.