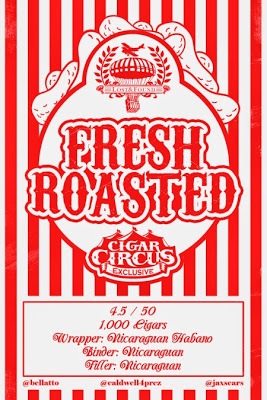 Lost & Found Cigars, the joint venture of Tony Bellatto, Robert Caldwell, and Jaclyn Sears will be releasing a cigar that will be an exclusive cigar intended for the Cigar Circus event being held at the “The Humidor” in Wichita Kansas.  The Lost & Found Fresh Roasted is set to become the 2nd shop exclusive released this year and 16th release overall by Lost & Found.

According to Tony Bellatto, the cigar was uncovered in Nicaragua.  In addition the cigar is an all-Nicaraguan blend featuring a Nicaraguan Habano wrapper.  The cigar measures 4 1/2 x 50 and a total production of 1000 cigars are being produced.

Lost & Found made their debut last year as “Impromptu” Cigars. Before becoming Lost & Found Cigars, the company was renamed “Bellatto / Caldwell / Sears”. The concept of the company involves tracking down cigars that have been resting for some time in aging rooms of various factories and bringing them to market. In this case, Fresh Roasted was “uncovered” in Nicaragua, but a specific factory was not disclosed.

Cigar Circus is multi-vendor cigar event being held in Wichita, Kansas and is presented by The Humidor Cigars and Lounge.  The event takes place the weekend of June 13th.