Racks on Racks is a shop exclusive to the Cigar Federation store offered by Lost & Found Cigars. Lost & Found is a venture that was founded by Tony Bellatto, Robert Caldwell, and Jaclyn Sears. The company quietly launched in 2014 originally under the name, “Impromptu Cigars”. However, it was in 2015 when things exploded for Lost & Found Cigars as they have become one of the hottest small batch brands out there. The concept of the company involves tracking down cigars that have been resting for some time in aging rooms of various factories and bringing them to market. The company has been targeted online retailers specializing in boutiques to sell their products – making this a natural fit for Cigar Federation’s store. Because these are “pulled” from factory aging rooms, the number of cigars available are finite and in many cases quite small. Not much is revealed about these cigars, but with their catchy names and the fact that Robert Caldwell has become one of the hottest brand owners in the business, this has made Lost & Found cigars quite popular. Today, we take a closer look at Racks on Racks. Overall I found this one of the better “finds” by Lost & Found Cigars and one definitely worth checking out.

Racks on Racks is the fifteenth release released by Lost & Found Cigars. Five releases occurred in 2014. 2015 has been a much more active year as (at press time) there have been an additional ten releases. As mentioned, these releases are limited in nature and very few details have been disclosed.

The 2014 releases were as follows. Four cigars were originally released under the Impromptu Cigars name. With the release of the 2006 Vintage Stout Corona, which was the fifth cigar, the company started branding itself as Bellatto / Caldwell / Sears.

The 2015 releases are as follows. Originally the name Bellatto / Caldwell / Sears was going to be used, but it was soon renamed to Lost & Found Cigars.

Racks on Racks is the third shop exclusive to the Cigar Federation’s store following Ezra Zion’s The Collective and Crowned Heads’ The Buckingham.

Without further ado, let’s turn our attention to Lost & Found Racks on Racks and see what this cigar brings to the table.

Lost & Found Racks on Racks features a multi-national blend from three countries. It is described as a 2011 vintage.

Racks on Racks is available in one size – a 5 x 52 Belicoso. A total production of 3,000 cigars was made. The cigars are released in 8 count mazos in a “gift package” style packaging making for a total of 375 mazos. 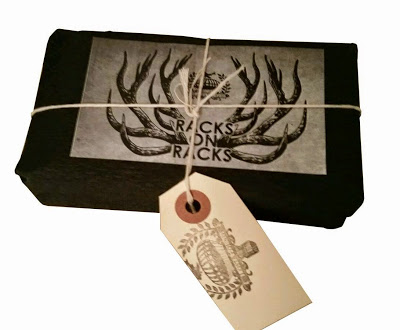 The wrapper to Racks on Racks is a medium brown color with some colorado red mixed in. Depending on how the light hits the wrapper will determine the degree of colorado red color given off by the wrapper. I found the wrapper had somewhat an oily sheen to it. There are some visible veins, and most of the wrapper seams were well hidden. The belicoso tip is small and has somewhat a sharp taper to the tip. There is a nice barnyard aroma present on this cigar.

Par for the course with the Lost & Found releases, Racks on Racks is unbanded.

Prior to lighting up Racks on Racks, I went with a straight cut that removed a little more than half of the belicoso tip. This still provided enough of the tapering effect of the belicoso. After clipping the tip, I moved on to the pre-light draw. The dry draw provided a mostly woody profile. There were a few chocolate notes and a slight spice. Overall I didn’t consider this to be the most exciting pre-light draw, but given this is not factored into the score or rating, there was no loss of points here. At this point, I moved on to lighting up Racks on Racks and awaited what the smoking phase would have in store.

The start to Racks on Racks provided a mix of wood, grass, earth, chocolate, and pepper notes. The pepper notes were a combination of red and white pepper. The pepper was also quite prominent on the retro-hale and had some herbal notes mixed in it. During the early stages, the wood, grass, and earth notes became primary with the chocolate and pepper on the tongue secondary.

Later in the first third, the wood notes became more of a nutty flavor. While there still were some earth notes on the forefront, the grassy notes receded joining the pepper notes in the background. The chocolate notes were even more distant, but still added a slight amount of sweetness.

By the last third, the pepper and toasted nut were the primary flavors. The chocolate and grass notes were quite distant. This is the way the cigar experience of Racks on Racks came to a close. The resulting nub was soft to the touch and slightly lukewarm.

Early on I found the burn to Racks on Racks to perform well, but as the cigar experience progressed, I found the burn became more high maintenance. While the burn path was straight with good combustion, the burn line tended to meander quite a bit and more touch-ups than I prefer. The resulting ash did stay firm – coming off the cigar in clean chunks. The ash itself had a salt and pepper color. The burn rate was ideal. While the burn temperature was ideal for most of the cigar, toward the end it did get slightly lukewarm.

The draw was ideal for a belicoso. It wasn’t too loose, nor was it too tight. While the burn was a little more high maintenance, no such issues existed with the draw.

Racks on Racks is going to deliver a lot of power. This cigar delivers a full strength cigar from start to finish. While it’s full strength out of the gate, it does slightly increase and this strength increase slowly sneaks up on you. As for the depth of the flavors, if you combine what is on the tongue with the retro-hale, this is going to be a full-bodied smoke. In terms of strength versus body, I did give a slight edge to the strength.

Overall I found Racks on Racks to be an interesting smoke. It didn’t smoke like your traditional maduro smoke. I definitely picked up plenty of the Dominican tobacco in this blend, but my guess is that it probably is the Nicaraguan tobacco that contributes to amping up this blend. I also found the tobaccos for this blend to be well aged and mature. In fact, for cigars from a 2011 vintage, I was amazed at the fire-power this cigar had. At the same time, there was no loss of flavor. In short, because this is a full strength, full-bodied cigar, this is not a cigar for the novice. In fact, I’d recommend this only to a more experienced cigar enthusiast who enjoys a cigar with a full profile. As for myself, it’s a little bit of pricey cigar (averages to $12.50 for a smoke), but it scores well and it’s still worth checking out. Normalizing this to a 20 count box, it’s one worthy of a five pack.